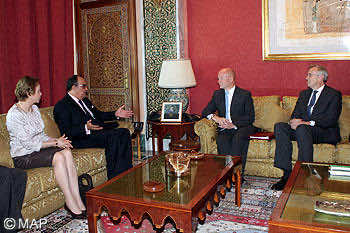 The non-resolution of the Sahara issue has “a negative impact on effective regional cooperation”, British Foreign Secretary William Hague said on Monday in Rabat.

Speaking during a joint press briefing with Morocco’s Foreign Minister Taib Fassi Fihri, Hague called on the parties to continue their engagement in the UN process with a view to find a mutually acceptable political solution to the Sahara conflict.

Hague, who is leading his first visit to Morocco as Foreign Secretary, welcomed the efforts undertaken by Morocco under the leadership of HM King Mohammed VI.

Highlighting the “excellent” relations between Morocco and the UK, Hague said that he discussed with his Moroccan counterpart the means to move the bilateral partnership agreement forward.

The two officials also discussed issues of common concern notably the situation in Libya and Syria along with Morocco’s relations with the EU and regional integration prospects, said Hague.

Fassi Fihri, for his part, voiced satisfaction regarding the momentum witnessed in relations with Britain since the implementation of the Bilateral Partnership Agenda.

Hague’s visit, which comes at a time the situation in the region undergoing a significant development, reflects Britain’s willingness to further promote cooperation with Morocco, said the Minister.

Fassi Fihri also recalled the appreciation of the British Government of the constitutional reforms and the large scale projects launched in Morocco, under the leadership of HM King Mohammed VI.

Issues relating to the situation in several Arab countries, the economic crisis in several EU countries as well as cooperation in the Mediterranean region and the latest development in the Sub-Saharan region were also raised during the talks with British Foreign Secretary, said Fassi Fihri.