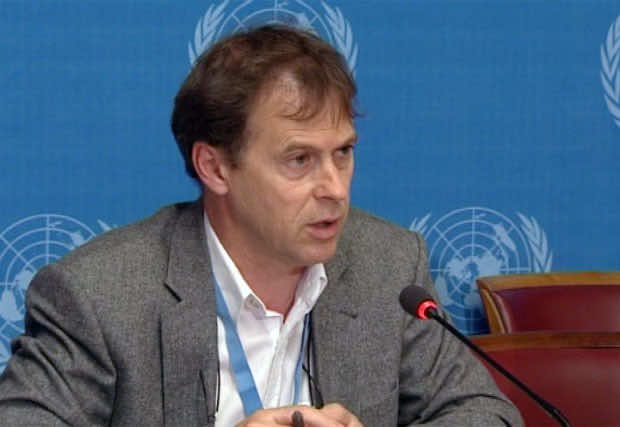 The United Nations human rights office today strongly condemned the reported killing of a number of largely peaceful protesters in Yemen in recent days, and urged that those responsible for the death of hundreds of people since the protest movement began be brought to justice.

Hundreds of people have reportedly also been injured since Saturday by the disproportionate use of force by Yemeni security forces against unarmed protesters in the capital, Sana’a, and in Taiz, as violent clashes continue between supporters and opponents of President Ali Abdullah Saleh.

“We are extremely concerned that security forces continue to use excessive force in a climate of complete impunity for crimes resulting in heavy loss of life and injury, despite repeated pledges by the Government to the contrary,” said Rupert Colville, spokesperson for the Office of the High Commissioner for Human Rights (OHCHR).

Speaking to reporters in Geneva, Mr. Colville reiterated OHCHR’s call for an international, independent, transparent investigation, for accountability and for justice.

“Those responsible for the hundreds of killings since the protest movement began in Yemen more than eight months ago must be prosecuted, regardless of rank or title,” he stated.

He also called on the Government’s armed opponents to remove weapons from public spaces used by peaceful protesters, and to stop launching armed attacks from densely populated areas.

OHCHR also voiced concern that the living conditions for residents of Sana’a and Taiz have continued to worsen, hitting the poorest households most, Mr. Colville added.

Yemen is one of a handful of countries across North Africa and the Middle East where large numbers of civilians have risen up this year to call for greater democracy and freedoms. But many people have died during clashes and protests and UN officials have repeatedly warned about the humanitarian and human rights situation.