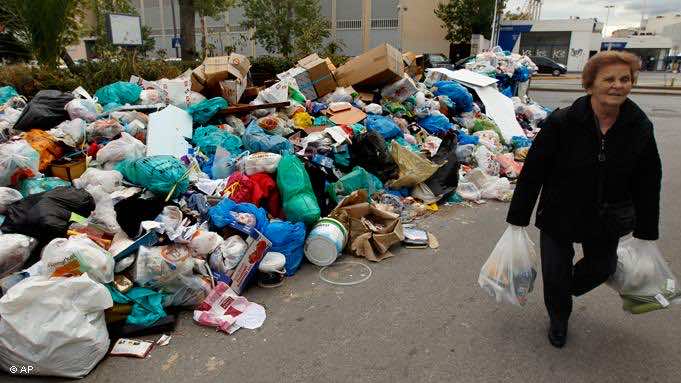 Greece has been waiting for two months for the next installment of its international aid – money it needs to remain solvent. But protests against measures needed to secure the tranche have plunged the country into chaos.

Ships remained docked, trains were halted and trash continued to pile up in Greece on Tuesday as individual strikes gave the country a preview of what one newspaper is describing as “the mother of all strikes.”

The strikes come during what Greek Prime Minister George Papandreou described as the “most critical week” facing Greece and the eurozone.

The week ahead “will determine the fate of the eurozone,” he said.

Unions representing half of Greece’s 4 million workers have called for a 48-hour strike beginning Wednesday, ahead of a Thursday vote in parliament over austerity measures the government must pass in order to secure the next 8-billion-euro ($11 billion) tranche of Greece’s international bailout loans and avert insolvency.

Civil servants continued to occupy the buildings of the housing and finance ministries in protest of the government’s proposed cuts to the public sector.

Air traffic controllers said they planned to keep all flights grounded on Wednesday and Thursday. Retailers, taxi drivers and lawyers have all threatened to go on strike as well.

On Monday, the Greek army was sent in to begin carrying away waste from the streets of Athens amid a municipal employee-led blockade of the city’s main landfill.

Speaking in Vienna, Minister for Regional Development Michalis Chrysochoidis told reporters that the protests were understandable.

“I believe that if we had this phenomenon of cutting salaries, pensions and incomes in other countries, Europe would have a revolution,” he said, adding that he was confident the Socialist government would see the draft legislation passed – despite its narrow four-seat majority in parliament and mounting dissent.

One Socialist lawmaker, Thomas Robopoulos, resigned his seat in parliament Monday, calling the new round of austerity measures “unfair and anti-labor.”

Without the next installment of international aid from the European Union, the European Central Bank and the International Monetary Fund, Greece will not be able to pay employee salaries, pensions and other bills.

Following a meeting with President Carolos Papoulias, Papandreou said Greeks “must understand that we are in this battle together.”

“We must show a united front … to obtain the best possible result [at the EU summit] on Sunday,” he said.

The pressure to come up with a definitive solution to solve and contain the Greek debt crisis is not just on Athens but on the eurozone as a whole.

German Finance Minister Wolfgang Schäuble told a conference in Dusseldorf that European governments would adopt a five-point plan at the Sunday summit in Brussels, but he warned that the meeting would not yield a “definitive solution” to the Greek debt crisis.

Leaders are expected to propose a plan to recapitalize banks and reduce Greece’s debt by asking the country’s private creditors to accept steeper writedowns on their holdings than previously agreed. Leading German and French banks have said they will resist forced recapitalization.

Meanwhile, a spokesman for German Chancellor Angela Merkel said Berlin was working “intensively” to figure out how German banks could be involved in a second bailout for Greece.

Greece’s overall debt is predicted to rise to 357 billion euros ($491 billion) this year.