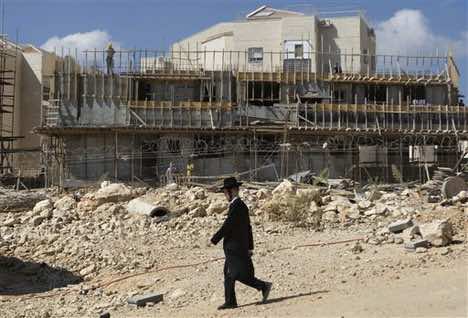 Creation of a new neighborhood beyond the 1967 border empties of all meaning Netanyahu’s commitment to negotiate all of the core issues, including that of East Jerusalem’s sovereignty .

At a time when the Shalit deal is raising the stock of Hamas in the eyes of Palestinians in the territories, the Netanyahu government is making an effort to depict Fatah, committed to reaching a negotiated agreement with Israel, as devoid of purpose. Not a week goes by without news of a new building project in the territories or in East Jerusalem. A few days after the prime minister announced the imminent appointment of a panel to look for ways to legalize the settlements and outposts that were built on private Palestinians lands, Haaretz reported progress on a plan to create a new Jerusalem neighborhood on Israel Lands Administration land beyond the Green Line.

Fourteen years after his decision to establish the Har Homa neighborhood created a crisis in relations with the Palestinians, Benjamin Netanyahu gave his blessing to the construction of 2,610 homes in the south Jerusalem neighborhood of Givat Hamatos. One third of the housing units are to be built as an expansion of the Palestinian suburb of Beit Safafa, but the creation of the new Jewish neighborhood will reduce the likelihood of reaching a peace agreement over Jerusalem that would allow for territorial contiguity between the Palestinian communities. Givat Hamatos joins the plans for the expansion of Gilo and Har Homa to complete the ring that will cut off East Jerusalem completely from the southern West Bank.

The decision to advance the plans for the new neighborhood was taken during the height of efforts by the Middle East Quartet to restart the Israeli-Palestinian negotiations. The Quartet’s new proposal, which was “welcomed” by the cabinet, emphasizes that both parties must avoid any measures that would prejudge the final-status arrangement. The international community, and in particular the Obama administration, UN Secretary General Ban-ki Moon and European Union foreign policy chief Catherine Ashton, joined the chorus of criticism of Israel by the Palestinian leadership.

The creation of a new neighborhood beyond the June 4, 1967 border empties of all meaning Netanyahu’s commitment to negotiate all of the core issues, including that of sovereignty in East Jerusalem. The prime minister must instruct the relevant ministries, without delay, to halt the Givat Hamatos plan and avoid taking steps that undermine the status of our Palestinian partner and Israel’s international status.