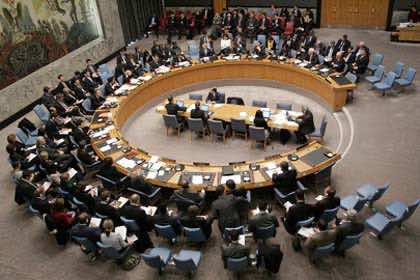 United nations— The Security Council was meeting Tuesday to review for the first time the work of a committee considering the Palestinian request for full UN membership, diplomats said.

“It will be an opportunity to get up to date on the work of the ad-hoc committee,” a diplomat said.

The Security Council president, Nigeria’s Ambassador Joy Ogwu, “will give an update on the progress done so far,” said another diplomat, speaking on condition of anonymity.

The discussions within the 15-member Security Council could last until the end of the October or beyond before the Palestinian request goes to a vote, diplomats say.

It takes nine votes in favor and no vetoes to approve a recommendation to the General Assembly for the admission of a new state.

The United States has said it would veto a vote in favor of admitting Palestine to the United Nations, arguing that a real two-state solution can only come from a deal reached with Israel through direct talks.

Washington has deployed intensive diplomatic efforts to prevent the Palestinians from getting nine favorable votes, so as to avoid having to cast a veto that would be damaging to US interests in the Muslim world.

If the Security Council bid fails, the Palestinians are expected to go to the UN General Assembly to seek observer state membership of the UN. They would almost certainly get a majority in favor.

France has called for the Palestinians to be given observer state membership in a bid to defuse the diplomatic clash.

Tuesday’s meeting coincides with the freeing of a French-Israeli soldier, Gilad Shalit, by Hamas in the Gaza Strip in exchange for the release of 1,027 Palestinian prisoners.

More than 450 Palestinian prisoners were freed Tuesday and the rest are to be freed in two months.

Envoys representing the Middle East peace Quartet — the United States, the European Union, the United Nations and Russia — are to meet separately on October 26 in Jerusalem with Israeli and Palestinian officials.

This is part of a parallel effort to revive peace talks that have been suspended for more than a year.

On September 23, in response to the unilateral Palestinian bid at the UN, the Quartet proposed a new round of peace talks that would begin in a month and conclude with a peace agreement in a year.

Israelis and Palestinians have both responded favorably to the proposal, but their reactions suggest they have opposing interpretations of the initiative.

The Palestinians refused to resume direct talks with Israel unless it freezes construction of Jewish settlements in the West Bank and east Jerusalem, something Israeli Prime Minister Benjamin Netanyahu rejects.