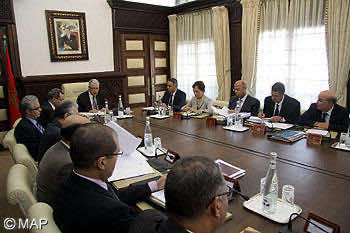 Seventy-three percent of investments part of the Millennium Challenge Account program have been achieved for a total cost of 697.5 million dollars, the Head of Government’s office said on Monday.

All the projects pertaining to the Millennium Challenge Account (MCA) program  are on the way to be implemented in close collaboration with the US, the Head of the Government’s office said in a statement issued at the end of the 9th strategic orientation meeting of the Agency of Partnership for Progress (APP), held under the chairmanship of the Head of Government Abbas El Fassi.

Concerning the Fruit Tree Productivity Project, the planted area covered 42,000 hectares, that is over 68% of the programme, the same source said, noting that 50,000 high quality date palms seedlings have been distributed in order to generate permanent revenue for farmers in the medium term.

The statement points to the setting up of 14 landing points to develop small scale fishing, as well as the construction of fish wholesale markets in the cities of Marrakech, Fez, Taza, Beni Mellal with a view to promoting the marketing of sea food.

As for the Artisan and Fez Medina Project, the same source said that actions aiming at modernizing the means of production will be funded.

The programme also provides for literacy and training with 37,000 people who have took functional literacy courses and vocational training, added the statement.

He same source underscored the training of 3000 specialized employees in micro-credits and the achievement of 72% of the Enterprise Support Project which is designed to improve the outcomes of two existing high priority Government development initiatives, the national initiative for human development (INDH) and Moukawalati.

The Agency of Partnership for Progress (APP) is a Moroccan public institution tasked with implementing and executing programme goals designated by the accord “Millennium Challenge Compact”, concluded in 2007 between Morocco and the US.