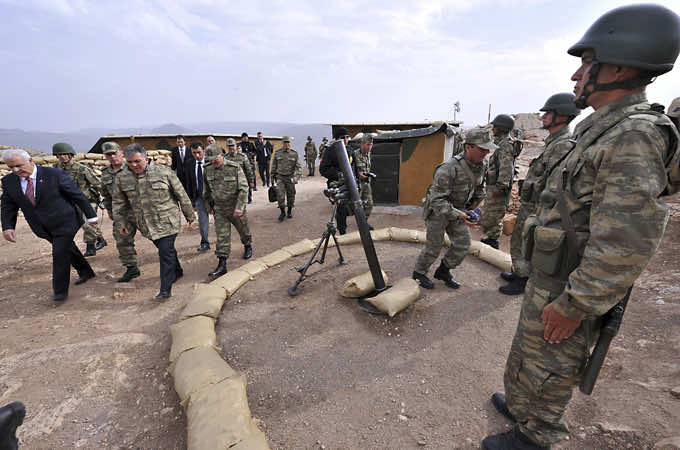 At least 26 soldiers have been killed in simultaneous attacks on police and military installations in southeastern Turkey, according to local reports, prompting a Turkish military response that has involved incursions into northern Iraq.

A security source said the attacks were carried out by Kurdistan Workers’ Party (PKK) in several locations in Cukurca and Yuksekova in Hakkari province near the Iraqi border, during the night from Tuesday to Wednesday.

The Turkish army responded with an air-supported operation against the fighters in Iraq’s northern Qandil mountains, with both airstrikes and soldiers on the ground employed.

“[The fighting] started, we understand, just after midnight last night, and the combat is still under way,” reported Al Jazeera’s Anita McNaught in Istanbul.

“There are still pockets of fighting going on as the Turkish military belatedly floods the area with reinforcements and tries to find out exactly where these attacks were launched from and who was behind them.

The incursions into Iraq are “not unprecendented: for the last couple of years the Turkish parliament has given the military permission to do this. And they’ve gone across, we understand, with planes –  there have been airstrikes on Iraqi territory,” McNaught reported.

The Turkish government has an acceptance agreement with the Iraqi government to allow for such ‘hot pursuit’ operations, and earlier this month the country’s parliament renewed the Turkish military’s mandate to conduct ground incursions into Iraq..

The Firat news agency, known for its close affiliation with the PKK, reported that Turkish ground troops were involved in the incursion as well.

“Turkish ground forces are attempting to cross the Iraqi border at Jeli, in the Hakkari region” of southeast Turkey, Dozdar Hammo, a spokesman for the PKK, told the AFP news agency.

The chief of Turkey’s military was reported to have rushed to the area after the attack, while the country’s prime minister, interior and defence ministers, intelligence undersecretary and military commanders held an urgent meeting at the PM’s office.

“No one should forget that those who make us suffer this pain will be made to suffer even stronger,” he told reporters on Wednesday. “They will see that the vengeance for these attacks will be immense.”

Recep Tayyip Erdogan, the Turkish prime minister, canceled a scheduled visit to Kazakhstan in the wake of the crisis, with Ahmet Davutoglu, the foreign minister, also scrapping plans to visit Bosnia.

The deaths come a day after a landmine explosion, also in the southeast, killed eight people in an attack which security sources also blamed on Kurdish fighters.

Al Jazeera’s McNaught said the latest attacks appear to be a response to the Turkish military’s announcement on September 30 of the re-establishing of ‘temporary security zones’ in 15 separate locations across the southeast, which restrict civilian access.

“It’s the scale of the attacks that’s significant … this is the most serious string of fatalities, the most co-ordinated and deadly attack launched by the PKK in some considerable length of time,” she reported.

On Tuesday, a mine planted on a rural road in the Guroymak district of Bitlis province in the mainly Kurdish area, was detonated by remote control as a police car was passing by, the Anatolia news agency quoted governor Nurettin Yilmaz as saying.

Five policemen and three civilians, including a two-year-old girl, were killed in Tuesday’s attack. Three injured people were being treated at an intensive care unit.

Security forces combed the area in search of the assailants, believed to be members of the PKK.

Kurdish fighters have carried out a string of attacks in southeastern Turkey in recent months, killing more than 50 Turkish nationals since July.

The Turkish military has launched retaliatory air raids on PKK targets in northern Iraq, its first strikes in the region in more than a year.

Both the central government in Baghdad, and regional Kurdish authorities in northern Iraq, have condemned the Turkish raids as a violation of Iraqi sovereignty.

The PKK, listed as a terrorist organisation by Turkey and much of the international community, took up arms for an autonomous state in 1984, sparking a conflict that has claimed about 45,000 lives.