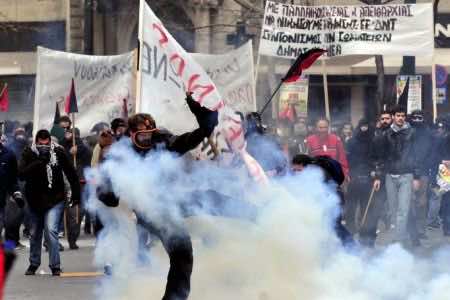 Thousands of protesters have marched in the Greek capital Athens at the start of a two-day general strike, as parliament prepares to vote on sweeping new austerity measures designed to stave off a default that could trigger a crisis in the wider eurozone.

Police were deployed in force in central Athens on Wednesday as protest marches began, blocking a road by parliament and shutting down two nearby metro stations.

At least 3,000 officers were stationed around the city, with additional forces guarding possible targets of violence such as embassies and government buildings.

Most of the country’s professional classes joined the walkout, including civil servants, tax collectors, doctors and teachers.

Taxi owners, petrol station operators and bakers also shut down their businesses in protest against the government’s economic policies.

Flights were grounded in the morning after air traffic controllers staged a 12-hour work stoppage.

Piles of rubbish continued to fester on street corners despite a civil mobilization order issued on Tuesday to order rubbish collectors back to work after a 17-day strike.

Civil servants have staged rounds of sit-ins at government buildings, with some, including the finance ministry, being under occupation for days.

“We expect that the strike could be the largest” in decades, Ilias Vrettakos, deputy president of the civil servants’ union ADEDY, said.

“The fact that other sections of society that are suffering from government policies are also participating gives a new dimension to the social resistance by workers and the people in general, and we hope that this mobilization will have an impact on political developments.”

George Papandreou, the Greek prime Minister, appealed on Tuesday for the protests to end.

“I would like to ask all those who occupy ministry buildings, choke the streets with garbage, close off ports, close off the Acropolis, if this helps us stand on our feet again- of course it does not.”

He compared the situation facing the country to a war and told deputies in the ruling PASOK party that it was their duty to support the tough new measures to be voted on.

“We must persevere in this war as people, as a government, as a parliamentary group in order for the country to win it,” Papandreou said. “We will win for the country, we will persevere. That is why I’m here.”

Papandreou’s narrow four-seat majority is expected to be enough to ensure the bill goes through, especially given possible support from a smaller opposition group.

A first vote, on the overall bill, will be held on Wednesday night, with a second vote on specific articles expected some time on Thursday.

The package mixes deep cuts to public sector pay and pensions, tax hikes, a suspension of sectoral pay accords and an end to the constitutional taboo against laying off civil servants.

“There’s a mood of desperation here … They’re describing this as the mother of all strikes, because every facet of public life is involved,” Al Jazeera’s Andrew Simmons, reporting from Athens, said.

“There is a mood here that wants to take on the government, and George Papandreou is in an impossible position, because he’s got pressure from within – he has a very slender majority in parliament … and the people are intent on putting more and more pressure on.”

Trapped in the third year of deep recession and strangled by a public debt amounting to 162 per cent of gross domestic product, which few now believe Greece can pay back, the country has sunk deeper into crisis, despite repeated doses of austerity.

European Union leaders are scrambling to set the outlines of a new rescue package in time for a summit on Sunday that hopes to agree measures to protect the region’s financial system from a potential Greek debt default.

The strategy includes new steps to reduce Greece’s debt, strengthening the capital of banks with exposure to troubled eurozone countries and leveraging a eurozone rescue fund to prevent market contagion to bigger economies.