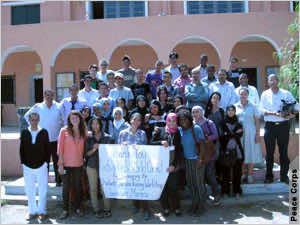 A journalism workshop held recently for Moroccan youth aimed to point them toward further journalism training in the future.

“My goal is to get Moroccan youth in a variety of training programs so that they can continue their interest in journalism long after my service,” said Peace Corps/Morocco volunteer Maureen Sieh, of Syracuse, New York, who organized the four-day workshop in southern Morocco for more than 50 secondary school and college students.

The U.S. Embassy in Rabat donated more than 100 journalism books and other materials to the workshop, which ran from September 7 to 10 and focused on news reporting and photography. Sieh’s efforts were publicized in an October 7 Peace Corps press release.

During the workshop, participants formed a journalism club that will meet twice a month to develop an online youth newspaper written in Arabic, English and French. They also learned about using social media to report community events. They created a Facebook page, which now has more than 200 followers, to share local news until the newspaper is launched.

“The students are really excited about the club,” Sieh said. “Nearly all of the workshop participants attended the first club meeting, and they brought friends who had heard about how great the workshop was.”

A graduate of Indiana University, Sieh has 20 years of experience working in journalism. Her career began in Liberia, where she was a newspaper reporter covering the Liberian civil war for six months before leaving on a Fulbright Fellowship in 1990 to pursue graduate studies in the United States.

President John F. Kennedy established the Peace Corps on March 1, 1961, by executive order. Throughout 2011, Peace Corps is commemorating 50 years of promoting peace and friendship around the world. Historically, more than 200,000 Americans have served with the Peace Corps to promote better understanding between Americans and the people of 139 host countries.

Today, 8,655 volunteers are working with local communities in 76 host countries. Peace Corps volunteers must be U.S. citizens and at least 18 years of age. They commit to serve for 27 months.