By Christian Lowe and Tarek Amara 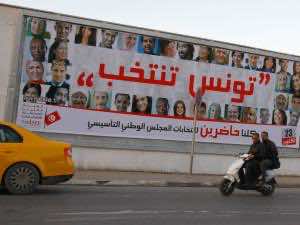 By Christian Lowe and Tarek Amara

The people who took to the streets to oust Tunisia’s president will rise up again if there is evidence of large-scale fraud in this weekend’s election, the leader of the Islamist party which is the front-runner in the vote said on Wednesday.

Tunisia became the birth-place of the “Arab Spring” when protests forced out president Zine al-Abidine Ben Ali and now, ten months on, its path towards building a democracy is being watched closely across the Arab world.

“If there is flagrant falsification of the results we will join the forces of the revolution, that started this revolution, to protect the will of the people,” Rachid Ghannouchi, head of the moderate Islamist Ennahda party, told a news conference.

“There is still a possibility that there could be falsification but so far the process has been reasonable,” he said.

Sunday’s election is the first to take place in any of the states swept up in the revolts this year which reshaped the political landscape of the Middle East.

Ghannouchi, who returned to Tunisia this year after 22 years in exile in Britain, said those forces had already ended Ben Ali’s rule and toppled the caretaker government that replaced him soon after.

“They are ready to bring about the collapse of 10 governments until they get a real elected government and an elected parliament,” he said.

The election on Sunday is for an assembly that will oversee the government, write a new constitution and set a timetable for new elections.

Diplomats say the voting should be broadly fair. It is being organised by an independent commission, in contrast to Ben Ali-era elections which were run by his own interior minister.

However, because of Tunisia’s inexperience in holding free elections, there is a risk that shortcomings in the voting process could be seized on by disgruntled parties as evidence of deliberate fraud.

Ennahda favours a great role for Islam in political life but says it will not impose its moral values on anyone and will respect women’s rights.

It is widely expected to win the biggest share of the vote on Sunday though short of a majority of seats in the new assembly. That will probably force it to negotiate an alliance with secularist rivals.