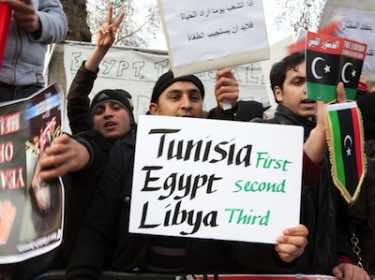 The final desperate act of the Tunisian Mohamed Bouazizi on December 17, 2010 touched off a wave of civil unrest in Arab countries. The self-immolation of the young fruit-and-vegetable peddler sparked the Arab Spring that is roiling the Middle East. Thanks also to the new communication technologies, there has been a domino effect that has spread the protest movement through all the Arab streets.

Million of citizens, often with women and youth in the lead, took to the streets chanting for jobs and democratic rights. Two dictators — Ben Ali of Tunisia and the Egyptian “pharaoh” — were forced to surrender or flee. All Arab countries were affected by the protests. Absolute monarchs and presidents-for-life began to tremble, and it seemed that the dictatorial systems were reaching their end. The protests that had begun for bread and “dignity” seemed to be leading to democracy also.

Yet in the absence of a basic and preliminary cultural revolution, the hopes now seem weakened. A non-minority of those who are demanding change in the Arab countries are still looking to the past for a solution. So we are seeing the traditional powers — the military elite and security structures — again in the news, posing severe threats to progress and nascent people-power. Despite decades of struggle, Arabs still have produced no “Al-Gandhi,” “Martin Luther Al-King,” or “Nelson Al-Mandela.” Quite the contrary: the traditionalists are the most organized; they dominate the scene, and civil society can not yet become a determining force.

Could the revolutions of hope give way to a cascade of sectarian conflicts? The deep economic crisis exacerbates the tensions, and could transform the revolutionary lyric into a true social emergency, producing an economic depression and geopolitical insecurity.

In Syria, Bahrain and Yemen there is already civil war. Libya, despite appearances, remains an open question, with the potential risk of becoming a big Somalia. Egypt, governed de facto by a junta, risks descending further into uncertainty.

Everywhere the instability seems to be turning chronic. Saudi Arabia, the world’s energy tank, although resting increasingly on the quicksand of its systemic fundamentalism, seems to be stable. However, this is a stability based not on opening society to reasonable, incremental reform (bottom-up), but on continuing restrictions and crackdowns (top-down), on sending troops abroad (Bahrain) and on expansion of the Gulf Cooperation Council (GCC) to Morocco and Jordan.

The protests of the Arab Spring were about the people’s need for bread and jobs, and these needs remain. Indeed, the global economic crisis has made the situation more dire. Some circles may be still cheering for democracy, but in most countries affected by the Arab Spring the economic recession has aggravated the situation already very heavily.

Social-economic insecurity produces a state of chronic instability. This is also why even the last superpower has insufficient strength to control the situation, and thinks of withdrawal — disengagement not only from Iraq (2011) and Afghanistan (2014), but from the whole Mediterranean and North Africa, in order to concentrate on China, Russia, Germany and on the Persian Gulf (Iran). The task of controlling the area should fall to the European sub-powers, but they do not have sufficient forces (France and England) or will (Germany). Besides, Europe is in the throes of its own deep economic turmoil and identity crisis, and is focused on trying to get its own house in order.

In the United States, the passion of the Occupy Wall Street protesters is clear testimony to the malaise due to the prolonged economic crisis. The strategic retreat of Obama and his discourse on “nation building” this past June, aside from its dynamic within U.S. electoral politics, has its root in this economic crisis: The U.S., after 10 years of “War on Terror” and a trillion dollars spent (the heavy legacy of the neo-con Bush administration), is reduced to seeking negotiations with the Taliban. President Obama, applying “smart power,” is trying to “aggregate the international action” without more spending. Yet, it is not possible to simultaneously withdraw and claim control. Taking into account all these factors, the best solution — and least expensive — for those who believe in democracy would be to support local democratic forces against the obscurantists who would deny civil rights and modernity.

The last super power intends for NATO to replace the U.S. without questioning U.S. policy. However, the members of NATO do not appear to be available. Each European sub-power goes its own way: while Turkey tries to reconstruct the informal legacy of the Ottoman Empire, China and Russia look at the new situation and, unlike in the case of Libya, veto the UN Security Council resolution on Syria.

If the war in Libya has highlighted the pitfalls in the Arab world’s march toward democracy, the Sino-Russian veto is the turning point between revolution and counterrevolution in Arab countries, with China and Russia coming down forcefully on the side of the old guard. China and Russia may reason: if the U.S is willing to tolerate Saudi reactionary policy, why should we not support our own geopolitical interests?

In the Arab countries, some tyrants are gone but the structures of power remain intact. These structures are all too capable of impeding real change. Riots and repression have reduced the already low productivity, aggravating the economic crisis, the basic reason for the protests. This has exacerbated the poverty of the working class and weakened the middle class, the very groups that were the protagonists in the Arab Spring. So the forces of reaction, led by Saudi Arabia and supported by most major powers, have begun to prevail. Despite millions of Arabs taking to the streets, the results remain uncertain. It seems as though the old Middle East is coming back: energy-rich lands to colonize, absolutist monarchs, presidents-for-life, military rule — the full spectrum of dictatorial systems at the service of the big powers. And all the while, most basic rights are still denied to ordinary citizens.

When the lyric opera of change (liberties, rights, democracy) becomes the funeral march of reaction (denied rights, dictatorship) the Spring can give way to a very cold winter where, as the Irish poet W.B. Yeats wrote, “everywhere / the ceremony of innocence is drowned,” while the logic of violence prevails. Among its other accomplishments, the Arab Spring had also obliged al-Qaeda to withdraw. With the arrival of winter, even that monster could clamber back out of its hole; and the monster will be all the more bloody, depending on how deep is the freeze.

Thus, the resurgence of the old power politics — the “realpolitik” of geopolitical influences. The regional protagonists (underwritten by their international alliances) are, as always, Saudi Arabia, Turkey, Pakistan, Israel, and Iran, with their divergent interests, including the old cold war between Saudi Arabia and Iran.

Despite this harsh geopolitical logic, human beings still need to have rule by law and basic human rights. And no one should forget that denied rights inevitably lead to instability and insecurity.