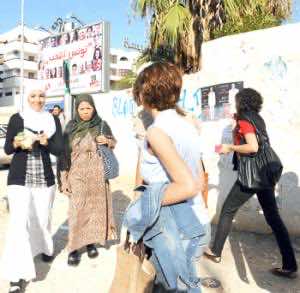 Cairo–Arab states that were once transfixed by the January revolt in Tunisia are now more focused on their internal crises than the historic October 23 elections in the tiny north African state.

Tunisians are to elect members of an assembly that will write a new constitution for the country, nine months after strongman Zine el Abidine Ben Ali was ousted in protests that spread to countries across the region.

But the polls — the first in the country since the government was toppled in January, at the beginning of the “Arab Spring” revolts — are overshadowed by violent confrontations in countries such as Syria, Libya and Yemen.

In Egypt, the population followed the Tunisian uprising with fascination and “revolutionaries” from the two countries exchanged advice via social media.

But “the situation is now serious enough” in Egypt that anything not related to the internal situation is of secondary concern, said Issandr el-Amrani, an independent analyst based in Cairo.

On October 9, 25 people were killed and more than 300 injured when a protest by Coptic Christians was attacked by the army and thugs, in the worst violence since president Hosni Mubarak was forced out by popular pressure in February.

Tunisia is also “a small country located on the periphery. The revolution is the first time that Tunisia was a model for other Arab countries,” el-Amrani said.

But he added that the voting process and its result “should be talked about” in the Arab world, with Egypt also preparing to go to the polls on November 28 for legislative elections.

Rafik Khoury, the editor-in-chief of the independent Lebanese daily Al-Anwar said that “the Lebanese press is interested in what is happening in Syria, Saudi Arabia, Egypt, and Iran, as these countries directly influence Lebanon.”

Meanwhile, in the Gulf, “these elections lack interest because the politicians of the region do not want to propagate an electoral culture among their citizens,” said Mohammed Mesfer, a professor of political science at the University of Qatar.

But in Morocco, closer to Tunisia, more attention is paid to the elections that are a key step in the development of Tunisia’s nascent democracy.

“We strongly hope that the election… will pave the way for a consolidation of the changes in favour of democracy, liberty and social justice,” Moroccan Communications Minister Khalid Naciri told AFP.

For Osama Khlifi, one the founders of Morocco‘s February 20 Movement, which was inspired by pro-democracy groups elsewhere in the Arab world, “the electoral process is a qualitative change for the Tunisian people, and a first test for achieving democracy.”

“This difficult experience will show whether there will actually be a real transition to democracy,” he said.

But in neighbouring Algeria, which is still marked by a dark decade of Islamist insurgency after the military cancelled 1991 legislative elections, pessimism prevails due to the emergence of fundamentalist Muslims, albeit in small numbers, in Tunisia.

“In Tunisia as in Egypt the counter-revolutionary forces are at work. However, in Tunis more than in Cairo, (Islamic fundamentalist) groups are seeking to derail the process of change,” the French-language daily Le Soir said.

For its part, the Liberte daily said that it was “romantic to believe that the Tunisian revolution would lead to an open democracy,” citing “the Islamist surge” in its neighbour