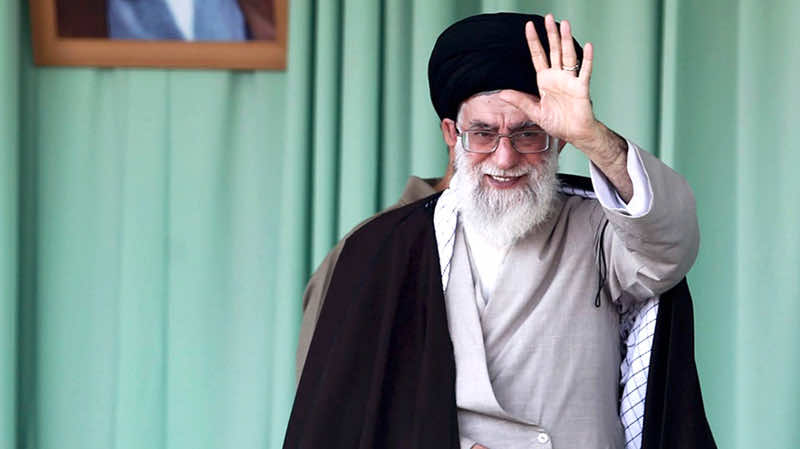 TEHRAN, Iran — In the ongoing political skirmishes among Iran’s leadership, it was the equivalent of bringing out the heavy ammunition: The country’s most powerful figure warning that the post of elected president could someday be scrapped.

Although no overhauls appear on the immediate horizon after Supreme Leader Ayatollah Ali Khamenei’s comment _ he spoke only vaguely about possibilities in the “distant future” _ the mere mention of eliminating Iran’s highest elected office shows the severity and scope of the power struggle between Khamenei and President Mahmoud Ahmadinejad.

For months, the ruling theocracy has been piling pressure on Ahmadinejad and arresting his allies for attempts to challenge the near-absolute authority of the cleric-ruled system that has controlled Iran since the 1979 Islamic Revolution. The blunt words by Khamenei on Sunday suggest a twofold agenda: Further tightening the lid on Ahmadinejad and showing others in the wings that Iran’s rulers are ready to take drastic measures to protect what’s theirs.

“There is bad blood,” said Mehrzad Boroujerdi, who follows Iranian affairs at Syracuse University. “Khamenei is trying to make it very clear that the system can only handle so much discord and that he holds the stronger cards.”

It also marks one of the first clear hints of the ruling clerics’ hardball strategies for parliamentary elections in March. Khamenei and his allies are expected to use their many tools, including the ability to vet and block candidates, to try to steamroll Ahmadinejad’s backers and push the president _ once Khamenei’s protege _ farther into the political margins.

The ruling power structure in Iran, which includes not only hard-line clerics but also the hugely influential Revolutionary Guard, appears increasingly eager to snuff out the internal bickering. It’s seen as an unwelcome distraction as the country confronts critical issues such as whether to restart nuclear negotiations with the West, complaints about its human rights record and U.S. allegations that a special unit of the Guard was linked to a plot to assassinate the Saudi ambassador in Washington.

“This is not a time when Iran wants anything that will rock the boat,” said Boroujerdi.

But it’s unlikely that the political friction will cool off soon.

Hardliners still want more punishment against Ahmadinejad for actions viewed as political hubris _ including a startling 10-day boycott of Cabinet meetings this spring to protest Khamenei’s choice for intelligence minister.

Dozens of Ahmadinejad’s supporters have been arrested in the backlash. So far, the crackdown has spared Ahmadinejad’s chief of staff _ and in-law relation _ Esfandiar Rahim Mashaei, who has been denounced as the head of a “deviant current” that is perceived as questioning the system of clerical rule. Some have even claimed Mashaei employed black magic “spells” to fog Ahmadinejad’s mind.

In June, Ahmadinejad railed against his opponents _ and Khamenei by extension _ for launching a “politically motivated” campaign and vowed to stand by Mashaei, whose daughter is married to the president’s son.

There is nothing at the moment to suggest Khamenei would attempt to drop the presidency in favor of a prime minister picked by parliament _ which would require a change of Iran’s constitution.

But it could reflect the frustrations among the ruling clerics after clashing with presidents for more than a decade: First the reformist efforts of Mohammad Khatami from 1997-2005 and then the growing ambitions of Ahmadinejad, who helped crush the reform movement but has also tried to carve out his own power base at the expense of the supreme leader. Ahmadinejad finishes his second and final term in June 2013.

Under Iran’s Islamic republic system, the president and parliament are elected. But the system is overseen by the unelected clerical hierarchy, which controls council that vet legislation and candidates for office, is in charge of the powerful judiciary and is tightly linked to the Revolutionary Guard.

“The president is elected by direct vote of the people, which is a good and effective method,” Khamenei told a gathering in the western city of Kermanshah. “But if someday, probably in the distant future, it is felt that a parliamentary system is better … there will be no problem to change the current structure.”

In theory, cutting out the elected president post would streamline the ruling clerics’ control by allowing them to weed out all but allied candidates for parliament. The lawmakers, in turn, would then presumably pick a non-confrontational prime minister.

In fact, Iran has been there before and it did not work out so smoothly.

After the Islamic Revolution, Iran’s system included a prime minister as head of government and a president _ which was then seen as mostly a ceremonial position.

But the prime minister’s post was dropped in 1989 by the late Supreme Leader Ayatollah Ruhollah Khomeini after internal bickering much like today. At that time, it was Khamenei in the presidential role quarreling over government policies with then Prime Minister Mir Hossein Mousavi _ now Iran’s main opposition leader after losing to Ahmadinejad in 2009 in disputed elections that touched off Iran’s worst domestic unrest in decades.

Khamenei made no mention in his speech about the unraveling of the former system. Instead, he described the option of going back as possibly “refreshing” the political order.

“It means changing policies …. which can prevent stagnation,” he said.

Khamenei also raised no inherent objections to forming political parties in Iran, which already has dozens of factions and blocs that effectively serve as parties. His comment, however, could be a nod toward more aggressive party-style campaigning in the upcoming parliamentary races.

They include a pro-Khamenei group known as the Resistance Front that was formed over the summer. Its founder, Ruhollah Hosseinian, said its goal was to “declare war” of anyone not fully backing the supreme leader _ an obvious reference to Ahmadinejad and his supporters.

“The supreme leader has fired a clear warning shot,” said William O. Beeman, a University of Minnesota professor who has written on Iranian affairs. “He is telling anyone trying to challenge the system, `Look, we are tired of this and we are willing to turn the clock back if needed.'”

Photo by: AP / Office of the Supreme Leader