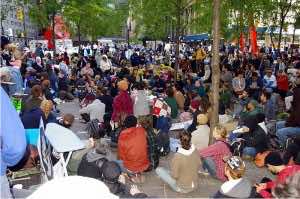 A new report by the United Nations labour agency warns of a youth jobs crisis in both developed and developing countries, with young people aged 15 to 24 finding it increasingly difficult to obtain decent employment and future prospects are dim.

As it released its “Global Employment Trends for Youth: 2011 Update,” the International Labour Organization (ILO) notes that the recent global economic crisis led to a “substantial” increase in youth unemployment rates, reversing earlier favourable trends over the past decade.

At the peak of the crisis period in 2009, the global youth unemployment rate saw its largest annual increase on record, rising from 11.8 per cent to 12.7 per cent between 2008 and 2009 – an unprecedented increase of 4.5 million unemployed youth worldwide.

However, this is due more to youth withdrawing from the labour market, rather than finding jobs. This is especially true in the developed economies and the European Union region.

The agency warns of a “scarred” generation of young workers and growing frustration amid millions of youth worldwide who are facing a dangerous mix of high unemployment, increased inactivity and precarious work.

If youth unemployment were examined alone, states the report, one might wrongly guess that young people in South Asia and sub-Saharan Africa are doing well compared to the developed economies, when in fact the high employment-to-population ratios of youth in the poorest regions mean the poor have no choice but work.

“There are by far more young people around the world that are stuck in circumstances of working poverty than are without work or looking for work,” the report points out.

It also notes that the collective frustration among youth has been a contributing factor to protest movements around the world this year, as it becomes increasingly difficult for young people to find anything other than part-time and temporary work.

It adds that the “bad luck of the generation entering the labour market in the years of the Great Recession brings not only current discomfort from unemployment, under-employment and the stress of social hazards associated with joblessness and prolonged inactivity, but also possible longer-term consequences in terms of lower future wages and distrust of the political and economic system.”

“These new statistics reflect the frustration and anger that millions of youth around the world are feeling,” said José Manuel Salazar-Xirinachs, Executive Director of the ILO Employment Sector.

He noted that governments are struggling to find innovative solutions through labour market interventions such as addressing skills mismatches, job search support, entrepreneurship training and subsidies to hiring.

“These measures can make a difference, but ultimately more jobs must come from measures beyond the labour market that aim to remove obstacles to growth recovery such as accelerating the repair of the financial system, bank restructuring and recapitalization to re-launch credit to small- and medium-sized enterprises, and real progress in global demand rebalancing,” he said.

The report offers a series of policy measures for promoting youth employment, including developing an integrated strategy for growth and job creation with a focus on young people as well as improving the quality of jobs and investing in the quality of education and training.

Perhaps most important of all, according to the report, is to pursue financial and macroeconomic policies that aim to remove obstacles to economic recovery.