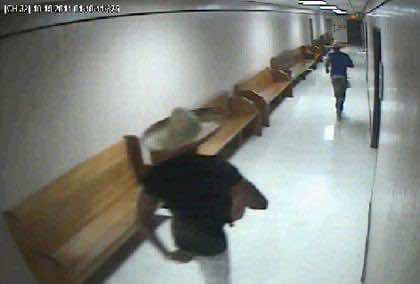 Officials in San Antonio say five Moroccan men arrested during a courthouse break-in early on Wednesday were pranksters who were likely intoxicated.

“There is no reason to think this is a terrorist incident,” Bexar County Sheriff Amadeo Ortiz told reporters Wednesday afternoon.

Three of the men were arrested as they walked out of the 120-year-old Bexar County Courthouse early Wednesday, and two others were arrested in a recreational vehicle parked outside the courthouse.

At the time, officials said photographs of “infrastructure” found inside the RV raised concerns.

All five were born in Morocco, live in France, and arrived in the United States last month on a flight from London to New York, officials said. Ortiz said they are on a still-valid 90-day tourist visa and apparently rented the RV in New York.

“I don’t know what their reasons were, but they came here and they were partying at several bars before coming to the Courthouse,” Ortiz said, adding that several beer bottles were found in the RV.

“There is no indication that they meant to do any harm to the courtroom, they have been cooperative with us, and there is no reason to suspect that this was terroristic activity of any description.”

Ortiz said no weapons were found in their possession. He said that the five are “pranksters, not terrorists,” and joked that if “their mothers saw them, they would not be pleased.”

Surveillance video shows one of the men walking down a courthouse hallway wearing a huge, Mexican-style sombrero, while another man is seen playing with a judge’s gavel.

The FBI Joint Terrorism Task Force, as well as Department of Homeland Security officials are still involved in the investigation, Herberg said.

Ortiz acknowledged that the case got a lot of scrutiny because the men are foreigners with Arabic names.

“If it had been some kids here locally that broke into the courthouse as a prank, then it would have been treated differently,” he said.