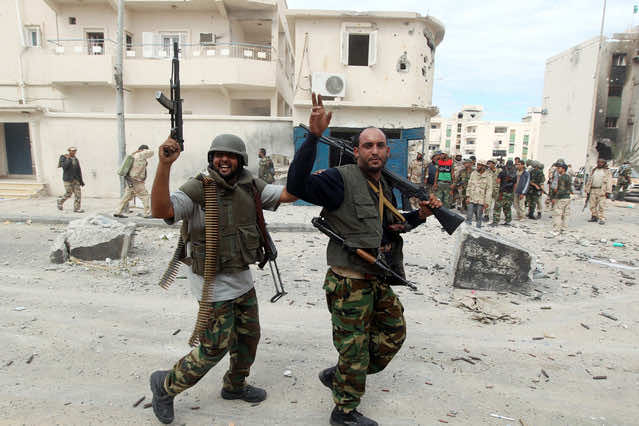 “We have captured the criminal who destroyed this country,” according to a statement aired by the channel. “Libya is joyous, Libya is celebrating.”

There were conflicting reports that Qaddafi was wounded and may have died from his injuries, the BBC and Al Jazeera television said, citing unidentified NTC officials.

The NTC will issue a statement later today on Qaddafi’s fate, Mahmoud Shammam, the council’s information minister, told the BBC in a live interview from the capital, Tripoli. He said he couldn’t confirm that Qaddafi was captured while leaving Sirte. The Misrata Military Council, which is leading operations in Sirte, said in an e-mail that it couldn’t comment on the former leader’s fate for security reasons.

Qaddafi has been in hiding for most of the eight months of fighting that erupted in February after he quashed protests, issuing statements that he preferred to die a martyr. He lost control of Tripoli in August, and his loyalists massed in his hometown of Sirte, strategic for its airport and seaport, and Bani Walid.

Libya’s new leaders cautioned that is was too early to declare complete victory over the Qaddafi forces. The start of NTC control of Sirte would begin the countdown to elections for a national council within eight months.

“Technically speaking, Sirte is under our control but there are still some pockets of resistance and some Qaddafi fighters are trying to escape,” Jalal El-Galal, a spokesman for the NTC, said earlier today in a phone interview in Benghazi. “The declaration of liberation won’t happen yet.”

Anti-Qaddafi forces in the eastern city of Benghazi joined the Sirte fighters in celebrating their advances. The scenes in Sirte, where the fighters fired their weapons into the air, were televised live by broadcasters including Al Jazeera.

Thousands of civilians fled the Mediterranean town, a major Qaddafi stronghold, during lulls in fighting, which erupted early last month after talks on its surrender broke down. The NTC had attributed the tenacity of Qaddafi loyalists in Sirte to the presence of his senior aides, including one of his sons, Mutassim, and to their fear of revenge attacks.