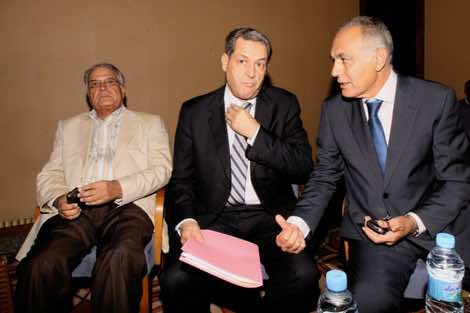 A liberal-led coalition of eight political parties says it is confident of winning a parliamentary election in Morocco next month aimed at staunching any spillover from the Arab Spring.

Under reforms approved in a July referendum, King Mohammed will hand over some powers to elected officials but will retain a decisive say on strategic decisions. The new post-election government will draft laws enshrining a new constitution.

The Coalition for Democracy will not be running under a unified banner in the November 25 poll but analysts say it was formed mainly to counter any possible alliances the Justice and Development Party (PJD) may seek to forge after the election.

The Islamist PJD has been cited in confidential U.S. diplomatic cables leaked by Wikileaks as the party with the largest popular following in Morocco.

“We offer the best possible representation of the Moroccan people … This is not a coalition that aims to be in the opposition,” said Finance and Economy Minister Salaheddine Mezouar who heads the National Rally of Independents (RNI).

“Our goal is to have a democratic and modern society”. He was speaking on the sidelines of a press conference during which the alliance, formed earlier this month, outlined broad highlights of its programme.

The biggest players in the alliance are the Authenticity and Modernity Party (PAM) and RNI. It also includes the Popular Movement, whose main support base lies within the indigenous Amazigh, and much smaller opposition parties including Islamists, left-wingers and ecologists.

RNI has traditionally led the liberals close to the royal court. The PAM agenda is mainly aimed at countering Islamists.

King Mohammed acted promptly in March to promise constitutional changes to reduce his powers after protests inspired by revolts in Tunisia and Egypt spread to Morocco. The parliamentary poll was brought forward from next September.

The peaceful protests by the youth-led February 20 movement demanded mainly a constitutional monarchy with the king as a figurehead, independent justice and an end to corruption.

Ahmed Akhchichen, a member of the coalition and Minister of Education, said that while the demands “were legitimate, there are divergences about what are the best solutions for them”.

“This (alliance) is a project that was designed to win not just by the force of the numbers (of seats it holds in parliament) but also by the nature of ideas the alliance brings,” he said.

The new palace-made charter won near-unanimous support in a July referendum that critics said was itself far too hasty to allow proper debate.

Parliamentary elections have been held in Morocco for almost 50 years in what was widely perceived as window-dressing by a close ally of the West. The king and a secretive court elite named the government and fixed key policies.

They were partly helped by high illiteracy rates, an ingrained deference towards a dynasty that claims descent from the Prophet Mohammad, and control over the media.

The interior ministry has used either repression or divide-and-rule tactics to tame political dissent.

Akhchichen said this was bound to change. “We can’t afford to continue doing things (politics) the way we had been doing them in the past … It does not lead to the desired level of efficiency,” he told Reuters.

The alliance promises to raise annual economic growth to 6 percent from as early as 2013 from an average 4.7 percent in recent years. It plans to create 200,000 jobs annually.

It also aims to keep the budget deficit below 3 percent of Gross Domestic Product (GDP), the public debt to GDP ratio below 50 percent and the current account deficit at below 2 percent of GDP.