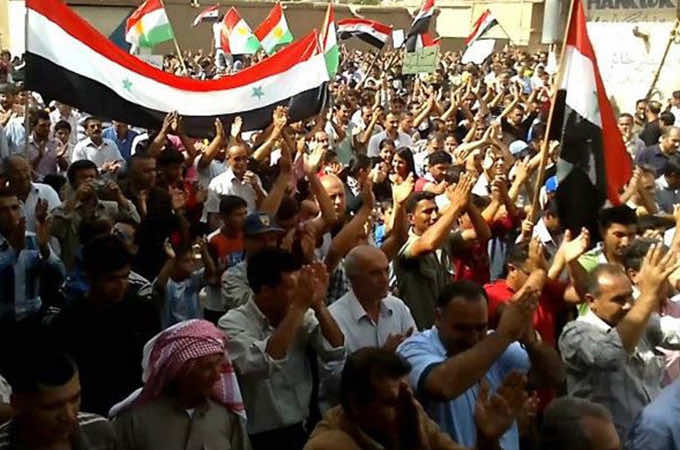 The killing of Libya’s Muammar Gaddafi fuelled demonstrations across Syria after Friday prayers that called for the ouster of President Bashar al-Assad, braving a heavier than normal security presence, activists and residents said.

Initial reports from activists said at least two protesters had been killed by live ammunition fired by security forces trying to disperse demonstrations in the central city of Homs.

The city of one million has been scene of extensive military operations to suppress regular protests and a nascent armed insurgency that has emerged after a relentless crackdown on persistent demonstrations calling for more political freedoms.

“Gaddafi is finished. It is your turn now Bashar!” shouted demonstrators in the town of Maaret al-Numaan in the northwestern province of Idlib, according to one witness.

“Prepare yourself Assad!” chanted protesters in the town of Tayyana in the tribal province of Deir al-Zor, on the border with Iraq’s Sunni Muslim heartland.

Assad, an ophthalmologist who inherited power from his late father in 2000, strengthened ties with Gaddafi months before the Arab Spring wave of popular unrest against repressive ruling elites erupted in Tunisia in December.

The two countries struck a series of cooperation deals and Assad later allowing a Syrian-based satellite station to broadcast messages from Gaddafi while he was on the run. He was killed in unclear circumstances after his capture on Thursday.

In the town of Houla northwest of Homs, a crowd of several thousands held shoulders and waved old Syrian flags dating to before Assad’s Baath party took power in a coup 48 years ago.

“Doctor, you are next!” read banners carried by the villagers, according to live video footage.

Demonstrations also broke out in Homs, the provincial capital 140 km (85 miles) north of Damascus, where three members of same family were also shot dead at an army road block in Bab Sbaa district on their way to prayers, local activists said.

Syrian authorities say they are fighting “armed terrorist groups” in Homs who have been killing civilians, prominent figures and troops. The authorities have banned most foreign media, making verification of events on the ground difficult.