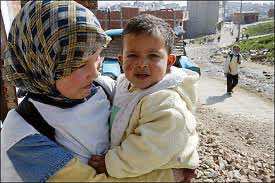 Female underage labour has been a long-standing concern in Morocco. With a bill recently approved by the government council, the country is closer than ever to eradicating the problem.

“We have worked for a long time to produce a draft bill to help stamp out the scourge of child housemaids,” Social Development Minister Nouzha Skelli said. “This will help us realise the objectives of our educational policy for young girls in rural areas, particularly through the National Human Development Initiative, government action and the work of civil society.”

The draft law adopted on October 12th bans work by girls under the age of fifteen. Female employees aged between 15 and 18 will be prohibited from performing dangerous household tasks and need parental permission to work as housemaids.

Their pay must not be less than 50% of the national minimum wage applied in the private sector. A fine of 25,000 to 30,000 dirhams will be imposed on any employer who breaches the law. Go-betweens will also be liable to punishment. Prison sentences of one to three months are planned for repeat offenders.

The initiative is good but the law still needs to be enforced if the problem of Moroccan underage maids is to be solved, according to sociologist Samira Kassimi.

Teams of inspectors need to be trained and assigned to the workplace, particularly during the first few years of the new law, in order to eradicate the problem completely, she added.

“People need to know that whistle-blowing is a civic duty, which will help girls from underprivileged backgrounds to live a normal life and go to school, like all children of their age,” she told Magharebia.

Some members of the public are anxious for the law to come into force so that they can play their part in solving the problem. Teacher Salima Hamraoui told Magharebia she knew a number of households that “shamelessly” employed little girls but could do nothing to report the incidents.

When the law comes into effect, it will allow publicising and preventing cases of “modern-day slavery”, she added.

The draft law covers all categories of domestic workers. It gives the workplace inspector the power to work as a conciliator between the employer and the employee. The measures contained in the bill cover employment conditions for domestic staff, weekly rest periods, annual leave, holidays as well as pay and sanctions.