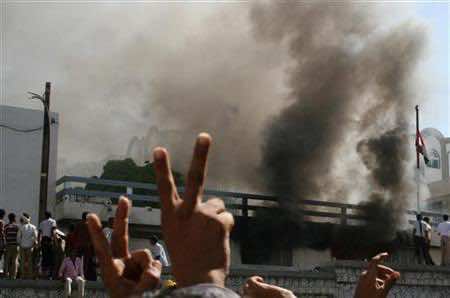 UNITED NATIONS — The U.N. Security Council is expected to approve a U.N. resolution Friday that calls for an immediate end to violence in Yemen and a transfer of power from the president to his deputy.

Earlier in the week, the five veto-wielding council members reached agreement on major elements in the resolution.

The draft resolution expresses serious concern at the worsening security situation and the deteriorating economic and humanitarian situation in the Mideast nation “due to the lack of progress on a political settlement and the potential for the further escalation of violence.”

The draft resolution reaffirms support for the Gulf Cooperation Council’s initiative calling for a cease-fire and the immediate signing of a power transfer deal by Yemen’s President Ali Abdullah Saleh that would grant him immunity from any prosecution if he hands power to his vice president.

Saleh endorsed the transfer of power deal several times only to balk at the last minute.

The draft resolution also underlines the need for an independent investigation into alleged human rights abuses “with a view to avoiding impunity.”

Saleh was gravely wounded in an explosion at his presidential palace in June and went to Saudi Arabia for treatment. During his absence, mediators and opposition groups sought to convince him to stay away and transfer power, but he declined and returned abruptly to Yemen late last month.

Unlike the resolution on Syria which Russia and China vetoed on Oct. 4, the Yemen draft makes no mention of sanctions or any other measures.

It demands that all sides immediately reject the use of violence to achieve political goals, and that armed groups remove all weapons from areas where peaceful demonstrations are taking place.

The draft resolution strongly condemns human rights violations by Yemeni authorities and demands that they immediately allow people to exercise their rights of freedom of assembly and expression.

Addressing another security issue, the draft resolution raises fresh concerns over the increased threat from al-Qaida in the Arabian Peninsula and the risk of new terror attacks in parts of Yemen.

Al-Qaida in the Arabian Peninsula, as the Yemeni branch is known, is considered by the U.S. the most dangerous of the terror network’s affiliates after it plotted two recent failed attacks on U.S. soil.

Its fighters and other Islamic militants have taken advantage of Yemen’s chaos to seize control of several cities and towns in a southern province. This has raised American fears that al-Qaida and the militants can establish a firmer foothold close to the vast oil fields of the Gulf and overlooking key shipping routes.