Morocco has been elected by the 193-member states of the United Nations General Assembly to serve as non-permanent member of the Security Council for the two year term 2012-2013. 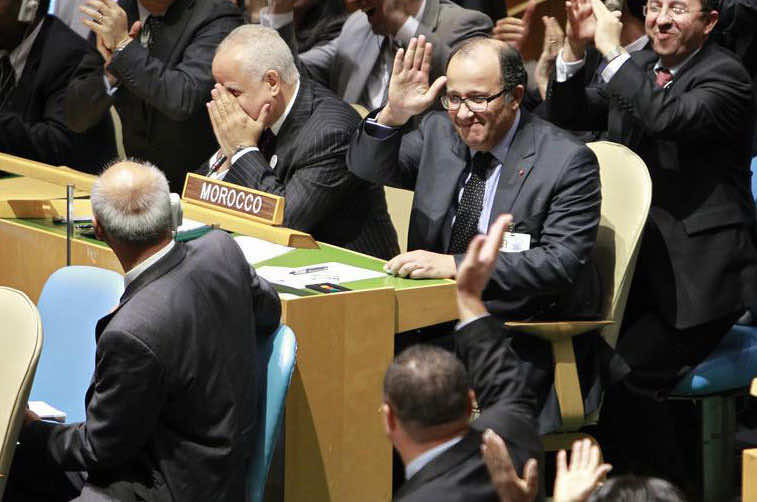 New York – There were three candidates from Africa competing for two seats available for the continent.

Many analysts were expecting Morocco to win the election easily over Mauritania and Togo. Other analysts expected Togo to win one seat and foresaw a more fierce competition between Morocco and Mauritania to win the second seat reserved for one of the two Arab countries.

As per this rule, most analysts excluded the possibility that both Morocco and Mauritania could win a seat at the Security Council, and expected Togo to be easily elected.

Since Morocco is one of the countries that contribute effectively to UN peacekeeping operations through its presence in various peacekeeping mission, including in Cote d’Ivoire, Democratic Republic of the Congo, Kosovo, Bosnia And Herzegovina, among others, it was perceived as having a greater chance to win its bid for the Security Council.  Mauritania has never taken part in any peacekeeping operation.

For any country to be elected to the Security Council, it needs to receive the votes of two-thirds of the 193 members of the General Assembly, which are 129 votes.

Since last January, both Mauritania and Togo obtained the endorsement of the African Union for their bid for the Security Council. Morocco did not enjoy this endorsement as it is not a member of the African Union. Morocco withdrew from the AU’s predecessor, the Organization of African Unity, in 1984 after the latter admitted the Polisario’s self-proclaimed  Saharawi Arab Democrat Republic  as fly-fledged member of the pan-African body.

Morocco obtained the endorsement of the Ministerial Council of the Organization of Islamic Cooperation in May 2009.

Right after the announcement of the results, Morocco’s Foreign minister Taieb Fassi Fihri said  to the press that Morocco had prevailed despite the attempts made by some African countries to exclude it from this competition on the grounds that it is not a member of the African Union (AU) . “We are extremely honoured by the confidence that was placed in us by our continent, our African brothers in spite of adversity and failed attempts to exclude the Kingdom” .

“Today a broad majority of African states decided to show solidarity with Morocco, to show confidence in Morocco, to support Morocco,” he said. “Our candidature was legitimate because of the principle of rotation,” he added.

Over the past few weeks and as the election day was drawing closer, the Polisario and its backers (Algeria and South Africa) did not leave any stone unturned in order to prevent Morocco from being elected as member of the Security Council. The main argument put forth by Morocco’s adversaries is that its candidature has not been endorsed by the African Union and that the presence of Morocco in the Security Council would result in an imbalance regarding the question of the Sahara.

In a letter addressed to members of the United Nations three days before the elections, Mr. Ahmed Boukhari, Representative of the Polisario Front to the United Nations, urged member States to refrain from giving their votes to Morocco. “Morocco challenges the decision taken unanimously by the Summit of Heads of State of the African Union in June in Malabo (Equatorial Guinea), which endorsed the candidacies of Mauritania and Togo for the two vacancies reserved for African countries in the decision-making body of the UN.” Mr. Boukhari went on to say that “Morocco is no longer a member of the African Union since 1984, and it would not be wise to recognize the obstinacy that country demonstrated against the decisions of the AU.”

Election to the Security Council is made through secret ballot.

Pakistan and Guatemala were also elected in the first round on Friday to the 15-nation U.N. Security Council for 2012 and 2013.

Guatemala ran unopposed, but needed to secure a two-thirds majority in the 193-nation General Assembly. It won 191 votes. Pakistan scraped through in the first round of voting with the minimum requirement of 129.

There will be a second round of voting for two more seats, one for Africa between Togo and Mauritania and one in Eastern Europe between Azerbaijan, Slovenia and Hungary.

The new members will join Colombia, Germany, India, Portugal and South Africa, whose terms end on 31 December 2012, and the five permanent Council members, which each wield the power of veto – China, France, Russia, the United Kingdom and the United States.