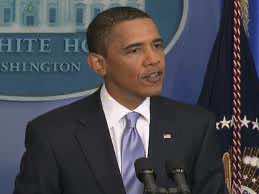 President Barack Obama said on Friday the United States will fulfil its pledge to pull troops out of Iraq by the end of the year.

“As promised, the rest of our troops in Iraq will come home by the end of the year. After nearly nine years, America’s war in Iraq will be over,” Obama told reporters.

He spoke after a video conference with Iraqi Prime Minister Nuri al-Maliki and said the two were in full agreement about how to move forward.

Obama said the two countries now move into “a new phase” and that it will be “a normal relationship between sovereign nations. An equal partnership based on mutual interests and mutual respect.”

The withdrawal of American troops marks a major milestone in the war that started in 2003 and resulted in the removal of Saddam Hussein from power in Iraq.

“Over the next two months, our troops in Iraq, tens of thousands of them, will pack up their gear and board convoys for the journey home,” Obama said.

“The last American soldier will cross the border out of Iraq with their heads held high, proud of their success, and knowing that the American people stand united in our support for our troops,” he said. “That is how America’s military efforts in Iraq will end.”

The U.S. military role in Iraq has been mostly reduced to advising the security forces in a country where levels of violence had declined sharply from a peak of sectarian strife in 2006-2007, but attacks remain a daily occurrence.

Senior Iraqis say in private they would like a U.S. troop presence to keep the peace between Iraqi Arabs and Kurds in a dispute over who controls oil-rich areas in the north of Iraq.