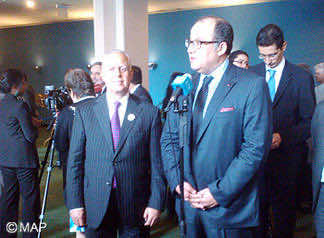 The landslide election on Friday of Morocco as a non-permanent member of the U.N. Security Council, is “a sign of confidence in the enlightened vision” of King Mohammed VI, said Moroccan Foreign Minister Taib Fassi Fihri.

“This election is essentially a sign of confidence in the enlightened diplomatic vision of HM King Mohammed VI,” said the minister.

Morocco is “honoured by the trust” of the international community, particularly Africa, during this election, the minister added.

“We are extremely honoured by the confidence that was placed in us by our continent, our African brothers in spite of adversity and failed attempts to exclude the Kingdom” on the grounds that the Kingdom is not a member of the African Union (AU), the minister said, immediately after the final and in the first round results of the score which, according to him, is the mark “of the exceptional confidence in Morocco and in its political stability” under the leadership of HM King Mohammed VI.

Despite this desire to rule out Morocco “on the grounds that it does not a member of such a continental organization (AU),” the Kingdom has won “a large majority,” stressed the minister who was addressing the international media at the U.N. headquarters, noting that there has been endorsement by the AU of two “only applications,” Togo and Mauritania, “excluding Morocco.”

However, today, “a large majority of African countries decided to show solidarity with Morocco, to put trust in Morocco.”

Morocco has “convinced a large part of the international community around the world,” he noted.

The minister also thanked “our Arab and Muslim brothers” for their “trust” in the Kingdom, the “European countries who voted in their majority for” the Moroccan bid and the countries of the Asia-Pacific region and Latin America and the Caribbean.