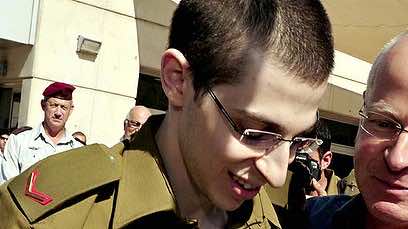 With the release of Israeli Soldier Gilad Shalit, the longest media campaign in recent Israeli history has finally come to an end. Apparently it’s quite an odd deal, the prisoner swap between Hamas and the Israeli government that returns Gilad Shalit…

People have been wondering about his perfect physical condition! It was thought that he would probably appear in a state of horror and terror or in a terrible physical well-being! Yet what was seen in the video has shocked almost everyone and reversed all expectations. It has highlighted many indications and revealed certain Islamic principals that are found in the teachings of Prophet Mohammed (Peace be upon him).

However, the video was not strange from a Muslim perspective. For Muslims it was not unusual to see Shalit appear in remarkably good health because of the good treatment by his guards. The treatment of prisoners of war exists in the core of the Islamic religion and it is a part of the Muslim manners that are inspired by living according to the Prophet’s teachings and obeying his orders. His great heritage taught Muslims everything starting from praying and fasting to the principles of Jihad and the proper treatment of captives, unlike the Zionists who have mastered the ways of humiliating humanity and crushing its dignity.

Shalit’s well-being proves that Al-Qassam brigades and the rest of the freedom fighting brigades applied the teachings of the Prophet (Peace be upon him). The Prophet urged his followers to treat their captives with clemency. He said to them, “You have to treat your captives kindly,” which means that a captive must be treated in the best way possible in regard to his food and drink, even providing a clean atmosphere for him and allowing him to maintain his hygiene.

Shalit appeared in elegant attire with a neat hair cut and overall orderly in appearance, taking into consideration that Shalit is an Israeli soldier from a military that has caused death and suffering to Palestinians. The question that is raised here; how can his captors control their anger and treat him kindly?

There is a noble goal behind this treatment. The Prophet (Peace be upon him) was aware of this fact long ago and thus Muslims learned it from him; the Muslim is an ambassador through his manners, his speech and his treatment of people. One of Islam’s war orders is the clothing of the prisoners of war, which should be decent and suitable for prisoners. It is narrated by Jaber (may Allah be pleased with him) that the prophet (Peace be upon him) after Badr Battle saw one of the captives not wearing a shirt so he asked one of his companions to give him his own. Also, it was narrated that on many occasions the Prophet (Peace be upon him) gave the captives his own clothes.

There is a verse in surat Al-Ensan in the Quran that carries in it one of the most beautiful humanitarian ethics of all times: “And they give food, in spite of their love for it, to the Miskin (the poor), the orphan, and the captive” (8- Alensan). Here in this great verse we see that the Quran goes hand in hand with the Prophet’s teachings in giving humanity one of the greatest lessons about the proper treatment of prisoners of war, and this lesson was clear in the video footage of Shalit. They treated him in the best way possible, earning through these actions the respect of viewers and maybe earning the divine reward of guiding someone to Islam.

It was narrated that Prophet Mohammed (Peace be upon him) had fed some prisoners and let them drink with his own noble hands. Abu Aziz Bin Omaiyer, who was a prisoner of Badr Battle, had spoken about the way he was treated by Muslims, and had said “I was held by the Ansar (Muslims originally from Medina) when they returned from the battle. When lunch and diner time approached they used to give me bread and they ate dates because the Prophet (Peace be upon him) had commanded that prisoners be taken care of. When I was given the piece of bread I got embarrassed and tried to return it back to them, but they insisted that I eat it.”

When the Prophet (Peace be upon him) saw the Jewish prisoners of Banu Qurayza detained outdoors at noon in a sweltering day, he addressed the guards and said “Don’t let them panic of hot weather besides the fear of weapons. Let them take a nap to cool down.” And that explains why Shalit was in a good condition. That is the leniency and mercifulness, of Islam, of which no contemporary international humanitarian law, Geneva Conventions, or any of the rights of prisoners of war can compete.

The smile that Shalit showed every time he pronounced the word “Mujahdeen” astonished some political analysts, who said it was a mockery. The confusion that Shalit lives with on a daily basis is the reason behind that smile. Shalit is wondering how could these “Mujahdeen” treat their enemy in such a way, and that was the message behind the smile. That brings us back to how the Prophet (Peace be upon him) used to treat the prisoners of war.

All of those facts point out the lofty morals of Muslims. These morals are evidences of the perfection of Islam, which answers all questions of life.

What do analysts have to say now about this Jihad Doctrine? About the Prophetic moralities the captors has showed? And what do experts have to say about the lessons of the Quran that define war and its morals?

Those moralities and treatment of prisoners of war are acts of worship to Allah (God).

*Nabila Nali is a contributor to Morocco World News.