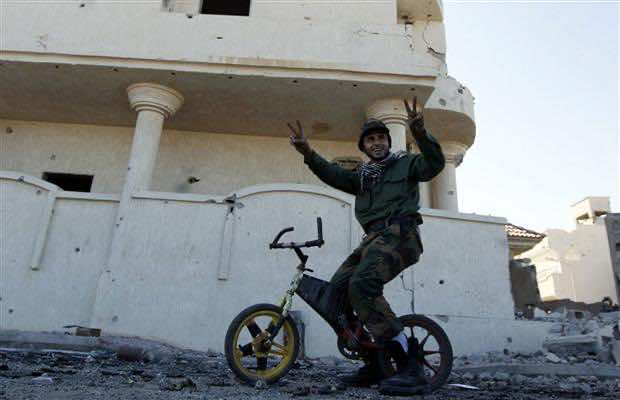 MISRATA, Libya — Military commanders in the Libyan city of Misrata said Saturday that no post-mortem would be carried out on the body of Moammar Gadhafi despite concerns over how the toppled dictator died.

Interim leader Mustafa Abdel Jalil said an investigation was being conducted into the circumstances of Gadhafi’s killing following his capture, bloodied but still alive, during the fall of his hometown Sirte on Thursday, after several foreign governments and human rights watchdogs posed questions.

But the military leadership in Misrata, where Gadhafi’s body had been stored in a vegetable market freezer overnight and was again put on display for hundreds of curious onlookers on Saturday, insisted the inquiry would involve no autopsy.

“There will be no post-mortem today, nor any day,” Misrata military council spokesman Fathi al-Bashaagha told AFP. “No one is going to open up his body.”

His comments were confirmed by two other Misrata military chiefs.

Bashaagha said that the new regime’s military commander for the capital, Abdelhakim Belhaj, was expected to travel to Misrata later on Saturday to view the corpse of the man who ruled Libya with an iron rod for 42 years.

But he said there were no immediate plans for National Transitional Council (NTC) chief Abdel Jalil to visit.

“Abdel Jajil did not come yesterday and is not coming today, and for the moment it is not expected that he will come.”

The interim leader was in the main eastern city of Benghazi on Saturday visiting some of the wounded from the eight-month uprising that felled Gadhafi.

“Yes,” he answered when asked if the circumstances of Gadhafi’s death were being investigated. He declined to take any further questions.

Questions remain over how Gadhafi met his end after NTC fighters hauled him out of a culvert where he was hiding following NATO air strikes on the convoy in which he had been trying to flee his falling hometown.

Mobile phone videos show him still alive at that point.

Footage showed the former dictator, his face half-covered in blood, being dragged towards a vehicle by a delirious crowd and forced onto the hood.

Those at the front, pushed and shook him, pulled him by the hair and hit him. At one point he appeared to be trying to speak.

Subsequent footage showed him being hauled off the vehicle, still alive, and hustled through the screaming crowd, before he disappears in the crush and the crackle of gunfire can be heard.

NTC leaders are adamant he was shot in the head when he was caught “in crossfire” between his supporters and new regime fighters soon after his capture.

“There have been rumours flying around since the killing of Gadhafi, after images were released, claiming that our revolutionaries slaughtered him,” a senior NTC official said.

“No instructions were given to kill Gadhafi, and we do not believe our revolutionaries intentionally killed him.”

But in a video circulating on the Internet, a young fighter from Benghazi claims he shot Gadhafi twice after capturing him — once under the arm and once in the head. He says he died half an hour later.

Russian Foreign Minister Sergei Lavrov said the “way his death happened poses an entire number of questions,” and called for a probe.

“The images we saw on television show that he was taken prisoner while wounded, and then later, once already a prisoner, his life was taken away.”

U.S. State Department spokesman Mark Toner said the NTC “has already been working to determine the precise cause and circumstances of Gadhafi’s death, and we obviously urge them to do so in an open and transparent manner as we move forward.”

Toner repeated a U.S. call to the NTC to treat prisoners humanely.

“On the issue of Gadhafi’s death yesterday, the circumstances are still unclear,” her spokesman Rupert Colville said. “There should be some kind of investigation given what we saw yesterday.”

Claudio Cordone, senior director at Amnesty International, said that if Gadhafi “was killed after his capture, it would constitute a war crime and those responsible should be brought to justice.”

He said the “NTC must apply the same standards to all, affording justice even to those who categorically denied it to others.”

And Gadhafi’s widow, Safia, who fled to Algeria in August, called on the United Nations to investigate the circumstances of her husband’s death, Syria-based Arrai television said.

Libya’s wanted former intelligence chief Abdullah al-Senussi, meanwhile, surfaced in neighbouring Niger after apparently fleeing through the desert after the fall of the oasis town of Bani Walid on Monday in the penultimate battle of the conflict.

“The presence of Abdullah al-Senussi has been indicated in the far north of Niger,” near the border with Libya, a government source in the capital Niamey told AFP on Saturday.

Senussi was one of three Libyan officials that the International Criminal Court issued arrest warrants for on charges of “crimes against humanity,” along with Gadhafi himself and his son and longtime heir apparent Seif al-Islam.

Seif al-Islam too remains at large. NTC officials said that he too may have fled to Niger.