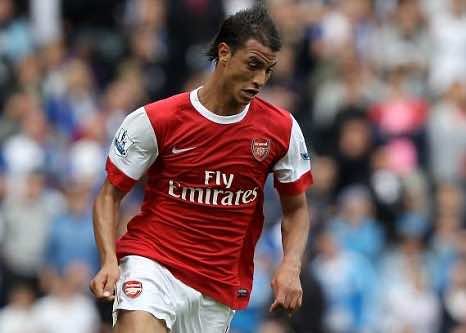 The Morocco striker initially impressed after arriving at the Emirates from Ligue 1 side Bordeaux last summer, but his form plumetted in the latter part of the season.

He has scored just two goals in his last 31 appearances for Arsenal, leading to him becoming a mainstay on the bench so far this season.

Following rumours of him returning to France, there was talk of a January move to Roma – but this has been rubbished by his agent.

‘The news about Marouane and Roma is absolutely unfounded,’ Pierre Frelot told calciomercato.it.

‘My client is happy at Arsenal and will remain here. There is no doubt.’

Despite Chamakh’s lack of goals for Arsenal, he has been backed by boss Arsene Wenger.

‘Marouane is not going anywhere. There is not a problem with Chamakh,’ Wenger said.

‘He is fighting for the position with Robin van Persie, who is in great form at the moment. He will get his chance; there are so many games at the moment.’