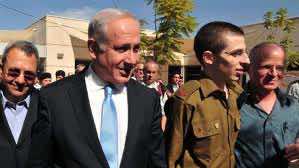 Prime Minister Benjamin Netanyahu and Hamas have had the last three years to reach an agreement for the release of captured Israeli soldier Gilad Shalit in exchange for Palestinian prisoners. In total, the two sides have had more than five years to work out a deal. Its conclusion on Tuesday, coming just weeks after the dramatic showdown at the United Nations when President Mahmoud Abbas submitted a Palestinian application for UN membership, gives good reason to question the motivation of the prisoner exchange, and its impact on peace in the region.

Understandably, most people have sympathy and can rejoice over the release of the young Israeli soldier who has spent the last five years underground as a prisoner of Hamas. He was captured while serving his mandatory military service and the intractable conflict, that otherwise may have brought about his earlier release, is not his fault. The same could be said about Palestinian prisoners.

Why, then, have events last month at the United Nations seem to have been the impetus for the agreement? One thing that the deal for Shalit in exchange for 1,027 Palestinians should not be interpreted as is a breakthrough in Israeli-Palestinian relations.

The deal benefits both Hamas and the Israeli Prime Minister. The popularity of Abbas and the PLA has been on the rise among Palestinians after the President’s September 23 UN General Assembly speech and the increased pressure that the membership bid has placed on Israel and the United States. The prisoner swap allows Hamas to stem this rise being enjoyed by its political rival. Having been somewhat marginalized, Hamas has been able to regain support among its constituents as it can claim a victory on behalf of Palestinians by having used its ability to take an Israeli prisoner in 2006 and to trade him for the freedom of over one-thousand Palestinians.

For Netanyahu, likewise, a leader whom many people, including the New York Times, doubt his sincerity about reaching an acceptable peace agreement with Palestinians, having Palestinians and its leadership divided is therefore favorable. It provides Netanyahu more justification to resist negotiating with Abbas. This is especially beneficial when it stems the rise of the most moderate leader and partner that Israelis can expect, which has placed the Israeli government’s obstinacy in a very awkward position during recent months. The only major US media organization it seems to have critically analyzed the deal, the NY Times, stated about the agreement, that for President Abbas it is “a challenge to his authority and credibility.”

The deal further benefits Netanyahu who will predictably use the exchange to cite again the ‘tough decisions’ Israel has made but “continues to get nothing in return.” Why can one expect Netanyahu to say this in the upcoming months? Abbas has made clear that the Palestinians will not negotiate unless settlement expansions cease. The prisoner release does nothing to appease this demand to stop settlements. When the Palestinians likely refuse to resume negotiations in the coming months amidst continuing settlement announcements, Netanyahu can be guaranteed to try to deflect criticism by pointing out this ‘good faith measure,’ and claiming, “yet, look at how Israel is rewarded,” language the PM has used in the past.

Moreover, the decision to exchange for Shalit over a thousand Palestinians, including many prisoners who plotted or engaged in terrorist attacks, should be seen less as a hard decision but as an unwise one. Over the last few years, there has been a lull in Palestinian violence. There have been few reported terrorist attacks inside Israel. Meanwhile, the reported rockets fired from Gaza have resulted in few casualties. This is a big change from the situation just several years ago.

With this deal, however, many of the prisoners being set free were involved in some of the bloodiest attacks against Israelis during the Second Intifada. Fifty-percent of Israelis believe the deal makes them less safe. It is hard not to imagine how it does not. Between Palestinians announcing this past week that they should capture more Israelis to exchange for more prisoners, to the very real possibility that some of those who have been imprisoned for terrorist attacks will be even more determined after years in detention to carry-out new ones, there is an increased prospect of new acts of violence.

What will be the affect of more violence besides sparking a vicious cycle? During the Second Intifada, Israel always argued it would not negotiate with Palestinians until violence stopped and the PLA could guarantee Israel’s security. If new attacks occur, Netanyahu will likely make the same argument to resist pressure to negotiate and make any concessions “under threat.”

There has been a lot of fanfare and coverage of the deal in the media, along with celebrations among Palestinians that might make one think that the exchange represents a move towards peace. However, the timing of the deal, in particular, should cause one to be skeptical that this is really a reason to celebrate. It is hard not to be sympathetic for Gilad Shalit who has spent the age of 19-24 in an underground prison, and for the reunification of Palestinian families. But this move does little to advance peace as long as settlements continue. In fact, it makes moving forward peacefully under the moderate leadership of Abbas more difficult. It will likely provide Netanyahu with a lot more reasons to resist negotiations.