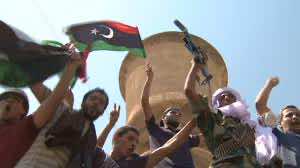 Some 200 independent publications have sprung up in Libya since the fall of Muammar Gaddafi, and newsagents say clients leave their shops with armfuls of papers to ensure they do not miss any news.

It is a small price to pay for freedom, they say.

“Customers are buying all the newspapers in front of them, and then deciding what to read,” said Rajab Al-Waheishi, a newsagent since 1956.

Business is booming, he said, thanks to the wide range of content and the sheer number of publications on offer.

Gaddafi was killed on Thursday outside his hometown of Sirte, where he had made his last stand against armed rebels backed by NATO.

Before the uprising that drove him from power, state censors held the media under tight scrutiny and newspapers often published identical articles provided by the state. Journalists who broke the rules were jailed or kidnapped.

Tunisians and Egyptians have also enjoyed increased media freedom after uprisings brought down leaders there earlier this year. But nowhere were the controls more draconian than in Libya.

“Everything is better. We are waiting for government, and after liberation we will see what to read,” said Sediq Magairif, a customer at a newsagent in central Tripoli.

Publishers are celebrating their newfound freedom.

“It’s good because in the past we couldn’t print anything without a permit. Now, no one asks us what to print,” said Abubaker Hammuda, who runs Al Taleb printing.

Idris Al-Musmari, who only recently emerged from a second term in jail after serving 10 years in the 1980s for his political activities, is heading a special committee formed by the National Transitional Council (NTC) to promote and support a free press.

Under an NTC proposal, the government pays the printing costs of the first three editions of any new publication and offer discounted printing services thereafter. Money from Gaddafi’s state-run media body is being used to cover the expense.

Musmari made clear the state planned to exercise control over its own publications, which will increase to five from two, chiefly to avoid fuelling tribal rivalries, but independents were free to publish whatever they wanted.

“There have to be lines. These are anything that would jeopardise our national unity and anything that is divisive,” said Musmari, providing the example of the divisions between Tripoli in the west, and Benghazi in the east, but added: “We can’t ban other newspapers from publishing anything.”

While most of the new publications are dedicated to eulogising the heroic battles fought by NTC fighters against Gaddafi’s forces, some have become platforms for ordinary citizens to criticise their new rulers and express their hopes for a democratic, free and prosperous country.

Most of the newspapers available are tied to Libya’s nine or 10 main cities, and the publications linked to Tripoli or Benghazi appear to be most widely distributed. There are small editions issued from villages, but they are poorly circulated.

The NTC plans to provide training and technical assistance for publishers, but is waiting for the assets belonging to the previous state-run body to be unfrozen.

“It’s healthy and natural. We have been neglecting our opinions for 40 years,” said Mahmoud Darwesh, one of Musmari’s secretaries.

Even the most critical publications have steered clear of incitement seen in social media networks and in graffiti in certain areas of town, he added.

“The criticism I have seen in papers so far has been constructive,” Darwesh said.