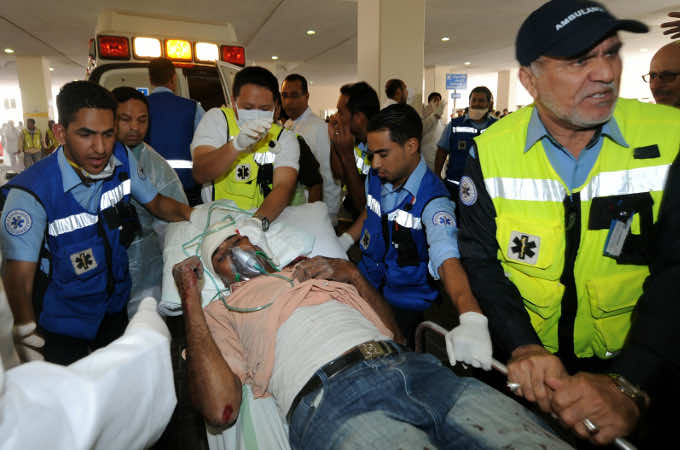 Twenty medical staff convicted of incitement and taking over a hospital during protests to argue in “retrial”.

A Bahrain court is preparing to hear arguments from medical staff convicted of serious crimes arising from the country’s massive spring protests, a case that has attracted international criticism.

The 20 doctors and nurses, whose arguments will be heard at the High Court of Appeals on Sunday, were convicted on September 29 on charges of weapons possession, inciting sectarian anger and hatred of the regime, obstructing the law, destroying public property, jeopardising general security and “forcefully occupying” the capital Manama’s main Salmaniya Medical Complex, where they worked.

The medics have argued that they were simply doing their jobs when they treated scores of injured protesters who were brought to the hospital over the course of weeks of demonstrations centred in nearby Pearl Roundabout.

A number of the convicted medical personnel, including some who have spoken to Al Jazeera, have described abuse and torture while in prison.

Their second chance, granted earlier in October, has been the subject of dispute, with the government calling it a “retrial” and opposition figures saying it is more like an “appeal”.

But a human-rights group told Al Jazeera on Saturday night that they had been assured the Sunday hearing would reopen the case entirely.

Abdulrazzaq al-Saiedi, a member of the group Physicians for Human Rights, said that Khalid Al-Khalifa, the Bahraini foreign minister, told a representative of the group on Saturday that the appeal court will “initiate a new trial and all the evidence and testimony will [be] re-examined and will be retested”.

Despite being civilians, the 20 medical personnel were tried in the special National Safety Lower Court staffed by military prosecutors and overseen by military and civilian judges. They were given sentences ranging from five to 15 years.

Following outcry from human rights groups and criticism from Ban Ki-moon, the UN secretary-general, who called the sentences “harsh” and said they raised “serious questions of due process irregularities”.

Bahrain’s attorney general on October 5 released a statement that seemed to nullify the verdicts and order a retrial in civilian court.

Said Boumedouha, a researcher on Bahrain for Amnesty International, the UK-based rights group, told Al Jazeera that the Bahraini king had issued a royal decree in August stating any criminal case tried in the special security court could be appealed in a civilian court.

Seven of the convicted medics who spoke with New York City-based Human Rights Watch recently have alleged “severe abuse” while in custody, according to a statement the organisation released on Friday.

The mistreatment included electrocution, punching and kicking, solitary confinement, deprivation of water and food, sexual harassment of female prisoners, interrogations lasting more than 12 hours, and weeks of incommunicado detention during which the accused could not speak to their lawyers, the organisation said.

Some of the medical staff have previously made similar allegations to Al Jazeera.

Fatima Haji, a rheumatologist sentenced to five years, said she was beaten and electrocuted by a woman whom guards called “sheikha” and who appeared to be Noura Al-Khalifa, a distant relative of the king’s wife.

Human-rights activists argue that any evidence obtained through coercion or torture should be set aside at the new trial.

One lawyer who has represented defendants in the special security court told Al Jazeera earlier in October that he estimated at least 600 people had faced charges there, of more than 1,000 in total who have been arrested.

In just two weeks this month, 208 people were sentenced or lost appeals in the security court, where prison sentences have averaged about 12 years per person.