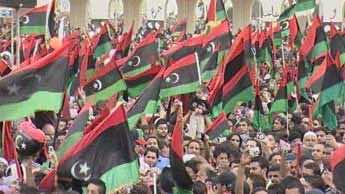 Libya declared the liberation of the nation on Sunday after 42 years of one-man rule by Muammar Gaddafi came to an end with his capture and death last week, setting the North African state on course for a transition towards democracy.

“We declare to the whole world that we have liberated our beloved country, with its cities, villages, hill-tops, mountains, deserts and skies,” said an official who opened the ceremony in Benghazi, the place where the uprising erupted in February and which has been the headquarters for the National Transitional Council (NTC).

Salah el Ghazal, another offical who addressed the tens of thousands of people gathered for the celebrations, that Libya was blessed with Mustafa Abdel Jalil, the head of the NTC.

“God has blessed us with the Mustafa Abdel Jalil, who deserves to be the man of the hour,” said Ghazal, who is a local official of the NTC.

Crowds listening to Libyan music and waving the tri-colour flag cheered. Ghazal paid tributes to all those who died, and referred to the “humiliating” death of Gaddafi.

“This is the humilitaing end that God wanted to set as example for anyone who practices the worst forms of injustice .. against their people,” Ghazal said.

Gaddafi, who vowed to fight to the end, was found hiding in a drain after fleeing Sirte, the last bastion of his loyalists. He died in chaotic circumstances after video footage showed him bloodied and struggling at the hands of his captors.