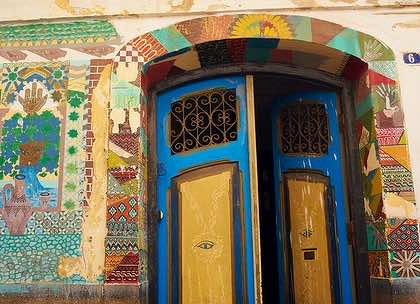 Sun-kissed and criss-crossed with famous footsteps, Tangier is made for wanderers, writes Steve McKenna.

OLD men in hooded gowns are huddling beside a bunch of burly, leather jacket-clad figures, whose stubbled faces are animated as they rattle machine-gun fast Darija (Moroccan Arabic) to each other and into their mobile phones.

Acrid clouds of tobacco and hashish smoke waft by.

Voices are raised. So many films have been set here – James Bond’s The Living Daylights and The Bourne Ultimatum among them – that I almost expect a rival gang or policemen to swarm in and all hell to break loose.

Instead, the burly blokes guffaw among themselves, one whips out a pack of cards and his friend orders another round of Moroccan whisky – aka sugary mint tea.

The only breach of the peace occurs in the cafe opposite, where the ageing proprietor shoos off two mischievous young children with his walking stick.

The Petit Socco square is one of Tangier’s liveliest social hubs. A former souk fringed with ramshackle hotels and shabby-chic caffeine dens, artists, writers, wheeler dealers, gangsters, regular folk and tourists have long come here to while away the time.

This haven of lounging and people watching seems resistant to the gentrification that’s affecting other parts of Tangier. King Mohammed VI is keen to jazz up and exploit the economic potential of a city at the crossroads of Europe and Africa, the Mediterranean and the Atlantic Ocean.

Unlike Marrakesh, Tangier isn’t brimming with must-see sights. But, in its own raffishly charming way, it’s equally as fascinating. Hugging the Strait of Gibraltar, just 14 kilometres from mainland Spain, the city’s cosmopolitan allure has been shaped over 3000 years. Phoenicians, Carthaginians, Greeks, Romans, Vandals, Byzantines, Arabs and myriad Western powers have all invaded a territory originally home to indigenous Berber tribes.

Some say Tangier hit its zenith between 1923 and 1956 when the city became an International Zone, carved into sectors overseen by nine countries (France, Spain, Sweden, Belgium, Portugal, Italy, Holland, the US and Britain).

The Interzone, as it was known, drew a colourful cast of businessmen, celebrities, go-getters, smugglers, spies, artists and ne’er-do-wells and, according to expat American writer and composer Paul Bowles, it was a place where “you could get anything you wanted if you paid for it. Do anything too, for that matter. It was only a matter of price.”

Petit Socco – one of their favourite hangouts – lies at the heart of Tangier’s ancient medina, a walled labyrinth of narrow, shaded, car-free streets lined with creaking houses and hole-in-the-wall workshops, kebabaries, confectionery, carpet and jewellery emporiums.

Navigating the medina is a tricky treat. The confusion wrought by a series of dark alleys, arched passageways and dead ends turn what should be five-minute walks into half-hour ones.

The Ville Nouvelle is a different story. Surrounding the medina, this modern French-designed part of Tangier is full of multicultural restaurants and bars, European colonial buildings, wide, palm-lined streets and fountain-studded squares. It’s this part of town that has seen big improvements in recent years, from myriad cosmetic changes to the redevelopment of Tangier’s decaying old port into a yachting marina and cruise-ship terminal.

The pair worked to preserve classical Moroccan literature and music – a sign of the affection Bowles held for his adopted country.

The Paul Bowles Wing of the American Legation Institute for Moroccan Studies, tucked inside the southern tip of the medina, tells his story.

Near Ibn Khaldoun, the Institut Francais organises exhibitions at Galerie Delacroix – a spot named after the French painter Eugene Delacroix, who, like compatriot Henri Matisse, was seduced by Tangier’s vivid hues.

Across the street, the five-star El Minzah Hotel is a polished Interzone icon and home to Caid’s Bar, the model, apparently, for Rick’s Cafe in Casablanca. Further on, Grand Cafe de Paris is arguably the most well-known of Tangier’s estimated 800 cafes and patisseries.

Facing the crossroads of Place de France, the cafe was a hang-out of William Burroughs, Truman Capote, Jack Kerouac and Allen Ginsberg, the so-called “Beatniks”, Interzone-dwellers renowned for their subversive scribbles.

Tangier has inspired a prodigious output of literature – Samuel Pepys, Mark Twain, Gore Vidal, Samuel Beckett, Gertrude Stein, Paulo Coelho and Ian “007” Fleming have all written about it – so I’m heartened to find a good bookshop.

The newly refurbished Librairie des Colonnes is halfway down Boulevard Pasteur, past the delightfully named Terrasse des Parrasseux (Idlers’ Terrace), where couples and friends slouch against old cannon and stare out over the hypnotic strait.

Burroughs, a frequent visitor to the shop, penned Naked Lunch in a nearby hotel, hidden down a side street sloping down towards the bay.

With sunset approaching, I hail a taxi to Cafe Hafa, a cliff-top mecca of mint tea and backgammon, close to the Kasbah, the fortified old sultan’s palace.

Apparently, Burroughs, Bowles, the Beatles and the Rolling Stones all came to smoke hashish at Hafa and, judging by the smell, it’s a habit that’s not been lost.

I order a Moroccan whisky and find my own space of fresh air on the cafe’s terrace.

In a city that’s fast changing, simple pleasures like these are still among Tangier’s top draws.