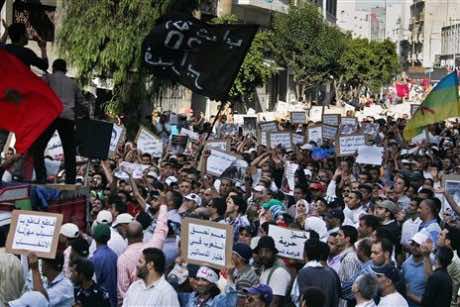 RABAT, Morocco  — Thousands of Moroccans have demonstrated in dozens of cities and towns across the country calling for a boycott of next month’s parliamentary elections.

The pro-democracy activists maintain the elections in the North African kingdom will only give credibility to an undemocratic regime.

King Mohammed VI appeared to have defused the country’s pro-democracy movement by amending the constitution to strengthen the prime minister and parliament.

Activists maintain the changes are only cosmetic and real power still resides with the king and his counselors.

Sunday’s demonstrations saw 3,000 protest in the capital Rabat and another 8,000 in Casablanca, the kingdom’s largest city.

The weekly demonstrations call for greater democracy and an end to corruption.