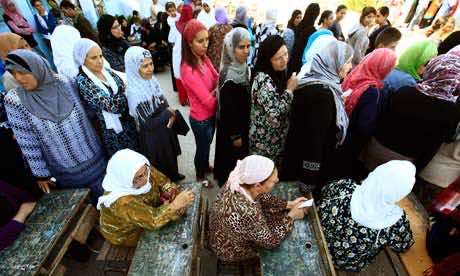 SIDI BOUZID, Tunisia  – In the town that launched the Arab Spring, Tunisians crowded into voting stations to take part in an election that in all likelihood would not be taking place were it not for an act of desperation last year by one of its sons.

Mohamed Bouazizi set himself alight last December in an act of protest against the arrogance and corruption of a police state that shut him and most other Tunisians out of political and economic life.

The unemployed university graduate was driven to despair by police who confiscated his unlicensed fruit and vegetable cart.

Bouazizi died of his injuries two weeks later, but the uprising he set in motion caused Tunisia’s president of 23 years Zine al-Abidine Ben Ali to flee to Saudi Arabia on Jan. 14.

Now Tunisians have voted for a constituent assembly that will write a new constitution and form an interim government, marking a new era that could set the standard for other Arab countries where protesters have demanded change and governments have scrambled to enact reforms to avoid street unrest.

“He’s the symbol, he’s the one who brought about the revolution,” said farmer Makrem Slimani, outside the municipality building where Bouazizi burned himself in the opening act of an Arab Spring drama that has touched many countries.

“He didn’t mean to burn himself to death. But he ended up giving himself for something. It was destiny, people had had enough,” added Slimani, remembering the Bouazizi family from his youth.

Sidi Bouzid was the perfect launchpad for a year of revolution that toppled Egypt’s Hosni Mubarak in February and Libyan leader Muammar Gaddafi in August, and in which Syrian leader Bashar al-Assad and Yemen’s Ali Abdullah Saleh are still struggling with street mobilisations to hold on to power.

A forgotten provincial town in the semi-arid belt of the Tunisian interior, it illustrated the gap in resource distribution in a country whose capital and other coastal cities in the north show signs of conspicuous wealth and consumption.

Tunisians are anxious for an improvement in the economy which has slowed in the wake of the uprising. But though Sidi Bouzid remains depressed and unemployment high, residents said there was no choice but to take part in building the future.

Jaafar al-Afi, a 23-year-old who helps with his father’s fruit and vegetable shop since he has no job, spent the morning in a street cafe where unemployed youth often gather.

He recalled how police would act with impunity towards citizens during the long years of Ben Ali — a former interior minister who removed predecessor Habib Bourbguiba in a bloodless coup — but said only participation would bring change.

“The majority will vote because they want people to find solutions,” he said, adding he would vote later in the day.

“The economic angle is the most important one. There needs to be more balance between north and south. Before, if you told someone in Sousse you were from Sidi Bouzid, he’d be like ‘where?!’ — though his is one of the biggest regions.”

The town is still covered in the graffiti of the uprising and the months that followed, phrases such as “The liar is wanted by the people” or, in English, “Stand up for your right” or “Stand tall, Tunisian, everyone is proud of you” in French.

Islamists — banned under Ben Ali and expecting a victory in the vote — have scrawled “the Islamic state of Tunisia” and “there’s no god by God” on walls.

Bouazizi’s family themselves have left.

Ben Ali gave them 20,000 Tunisian dinars ($14,000) in a desperate attempt to calm the unrest, so they quit the one-storey house of a poor neighbourhood in Sidi Bouzid, where the family used to sleep on mattresses on the floor, for a villa in La Marsa, an upmarket suburb of Tunis.

“These elections are a moment of victory for my son who died defending dignity and liberty. Nothing would have happened if my son had not reacted against voicelessness and a lack of respect.”” Mohamed’s mother Manoubia told Reuters in an interview on the eve of the historic vote.

“But I hope the people who are going to govern will be able to keep this message in mind and give consideration to all Tunisians, including the poor,” she said, tears in eyes.

Some in Sidi Bouzid complain that the family have turned their backs on them and improved their status through Bouazizi’s death.

“Everyone has a story about Bouazizi, so you don’t know what’s true and what’s not. I don’t want to speculate. Who knows why they really went to Tunis,” said al-Afi.

Whatever views some had on the Bouazizi’s, townspeople headed early to polling centres to reap the benefits of the revolution he sowed.

“This is the first time you feel that your vote counts, so it’s a responsibility,” said Sara Naji, a secondary school teacher. “We suffered a lot from pessimism and frustration but now we’re building a new life.”

Queues of people lined up in schools to vote, with independent observers and officiating officers supervising an orderly process that most Tunisians avoided before because Ben Ali’s police and ruling party routinely cooked up the results.

“This isn’t a rebirth of democracy — it’s the birth itself,” said voting officer Farhat Nsiri. “I have never seen such enthusiasm before. The process has been impeccable.”

Not everything was plain sailing.

In the Ibn Khaldoun School — formerly named ‘November 7’ after the date Ben Ali assumed power — peasant women were confused about what to do.

Officials scrambled over towards one woman in the traditional robes of the Tunisian countryside as she walked out of the voting booth brandishing her ballot paper. She was bustled back in to mark her choice and stuff it in the box.

In the yard outside, a group of women were looking to vent their anger because their identity card numbers didn’t match those on the electoral register.

There was some back-biting among supporters of the major parties that their opponents had been bought voters with gifts and handouts. Party workers milled around nervously to see that their rivals didn’t engage in last minute campaigning.

Shalbi Mohamed bin Sara, a 61-year-old union official, was milling around in the sun waiting to join the queue.

“In more than 50 years we never had anything like this, so it’s new to us. People are waiting around, but everyone’s excited.”