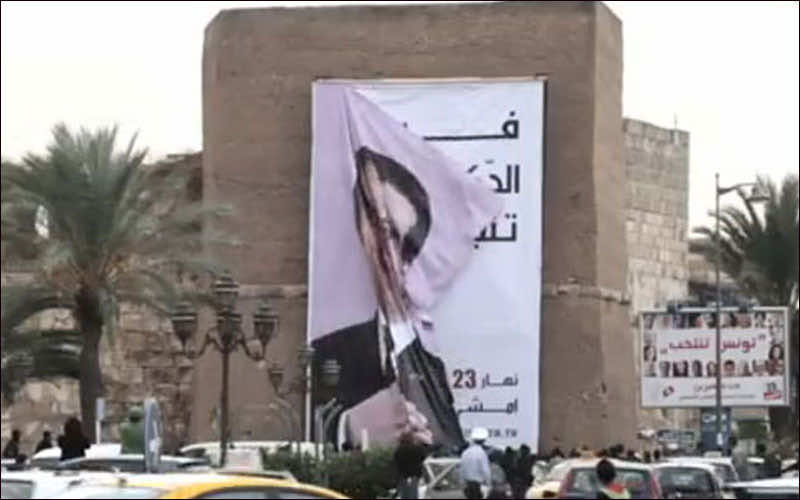 A giant poster of Tunisia’s deposed president hangs over a building in Tunis, a stark reminder of the former era when Zine El Abidine Ben Ali’s portraits adorned city walls across the country. Confused passers-by flock in shock and disbelief. Was he back?

After a few moments of confusion, some dared to tear down the poster, only to see another one. The message was simple: Wake up, dictatorship may return! Cast your ballots on October 23rd!

As Tunisians head to the polls to elect the Constituent Assembly on Sunday, non-governmental organisation “Engagement Citoyen” launched a last-ditch effort to mobilise citizens to vote.

Only 4.4 million Tunisians out of seven million eligible voters registered for the poll, the Independent High Electoral Commission (ISIE) reported in August. A quarter of young people said they were not planning to cast their ballots because they were “not convinced”, the National Observatory for Youth concluded in a recent study.

The Ben Ali stunt has drawn a lot of attention, especially in the social media. The video was viewed 50,000 times on YouTube within just twenty-four hours. The message particularly resonated with politically conscious Tunisians who call for preserving the gains of the revolution and establishing a democratic state.

Some activists are particularly concerned that a different type of dictatorship might emerge out of the transitional period and erode the secular foundations of the state.

“This is a targeted and deep message that came at a suitable time so that all Tunisians may rise up in defense of the revolution of dignity and freedom against any religious dictatorship or any other type of dictatorship that may threaten it,” Ahlem Tounsi told Magharebia.

Participating in the October 23rd vote is a way to ensure that Tunisians “won’t have another Ben Ali in a new form”, she added.

“It’s a wonderful idea,” Oussama Rouichdi agreed. “I think that it will be well accepted by Tunisians who are looking for democracy and who will have a major responsibility binding them to build the country’s future.”

He added that Tunisia now faced a choice between moving toward a “civil and democratic country” and returning to the old practices of “a despotic, dictatorial regime and a police state”.

Voting alone, however, is not enough to avoid the return of the former regime, argued Mohamed Ali Zouiaghi. Tunisians need to proceed on the revolutionary path against any domination by a single party, he cautioned.

Tunisians bloggers were particularly enthusiastic about the campaign. Many of them applauded the efforts of the organisers.

They “touched upon sensitive issues, given that dictatorship can return to our dear Tunisia in a new revolutionary form”, wrote “Analyse Tunisienne“.

“If ignorance and absence is the best environment for dictatorship, conscious people are the best atmosphere for democracy,” the blogger added.

Blogger “Un Noveau Depart” struck a similar chord, urging Tunisians to exercise their political right and make sure that the country does not slide back into “dictatorship, oppression and tyranny under a single rule”.