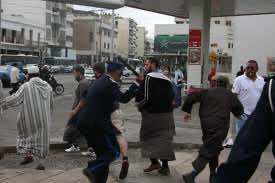 Thousands of Moroccans demonstrated in cities across the country on Sunday, calling for a boycott of early parliamentary polls next month whose outcome will be key to the future of reforms crafted by the royal palace.

The protests are the latest in a series of regular peaceful demonstrations by the youth-led opposition February 20 Movement, inspired by uprisings that ousted leaders in Tunisia and Egypt to demand a parliamentary monarchy and punishment for officials accused of graft.

In the capital Rabat, a Reuters reporter saw dozens of riot police with truncheons beating and kicking protesters who had gathered in front of the parliament building at the end of a march by around 3,000 people.

A local elected official in the country’s biggest city, Casablanca, said about 8,000 people took part in a similar protest there. Several thousand took part in protests in other cities including Fes and Tangier.

“These nationwide protests were held around the common theme of calling for a boycott of November 25 parliamentary polls,” said Omar Radi, an activist from February 20 Movement’s local committee in Rabat.

“It is obvious that the polls will bring to power the same figures who have for years been plundering the wealth of the country and holding hostage the future of the Moroccan population,” he added.

King Mohammed has promised in recent speeches that the elections will be fair and transparent. The main opposition Justice and Development Party (PJD) has decried laws recently passed for the polls as doing too little to prevent vote-buying.

Under reforms approved in a July referendum, King Mohammed will hand over some powers to elected officials but will retain a decisive say over strategic decisions. The new government will draft laws enshrining a new constitution.

In March the 48-year-old monarch, reacting swiftly to protests inspired by the revolts in Tunisia and Egypt, promised to reduce his powers through changes in the constitution. The parliamentary poll was brought forward from September 2012.

But protesters in Rabat, joined for the first time this week by hundreds of jobless graduates, chanted “The elections are a charade, you will not fool us this time.”

“Money and power must be separated,” read a placard carried by the protesters, while many brandished pictures of the body of Muammar Gaddafi, the slain deposed leader of Libya, with the caption: “This is what happens to despots.”

The charter drawn up by the king won near-unanimous support in a July referendum that critics said was itself far too hasty to allow proper debate.

Parliamentary elections have been held in Morocco for almost 50 years in what was widely perceived as window-dressing for the kingdom’s Western allies. The king and a secretive court elite named the government and set key policies.

Their grip on power was helped by high illiteracy rates, an ingrained deference to a dynasty that claims descent from the Prophet Mohammad, and control over the media.

The interior ministry has used a mixture of repression and divide-and-rule tactics to tame political dissent. This has led many Moroccans to lose interest in politics: turnout at the last parliamentary polls was officially 37 percent.