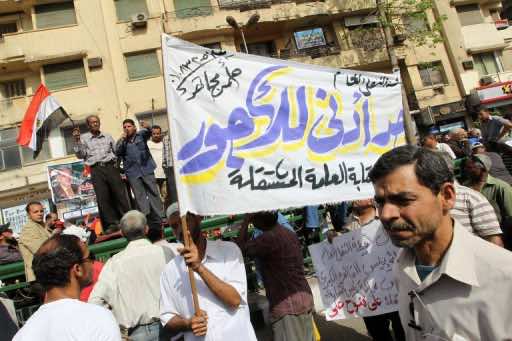 Labour protests — by teachers, bus drivers, dock workers and air traffic controllers — have persisted despite a mixture of threats and appeals by the ruling military, which has warned of their effects on the economy.

There is “increased political risk due to the continuation of strikes and labour protests, and no clear government plan to face this social unrest amid increasing budget deficit,” said Mona Mansour, a financial analyst with the Commercial International Bank.

“The downgrade reflects our opinion that risks to macroeconomic stability have risen during the transition period for Egyptian political reform, which we expect to evolve over the next two years,” it said.

S&P added that it could lower Egypt’s ratings further, later this year or in 2012, “if the political transition falters in a manner that leads to renewed political turmoil”.

The rating agency’s pessimism is “not a surprise,” said Mansour.

“Since the beginning of the revolution, there has been a series of downgrades from international rating companies due to the negative factors affecting stability and the general finances of the country,” she said.

GDP growth rate is officially expected to reach between three and 3.5 percent this year, but some experts say even that drop from rates of five to seven percent a few years ago is optimistic.

The key tourism sector lost $3 billion this year, and the benchmark index of the Cairo stock exchange tumbled by 40 percent in nine months.

Egypt starts its first parliamentary election since Mubarak’s overthrow on November 28 amid fears of a return of old regime figures in parliament and Islamist gains.

The military, which faces growing criticism of its handling of the transition, has said it would hand over power after a presidential election, but no one knows when that would happen.

The caretaker cabinet it has appointed appears weak and incapable of pushing through reforms.

The finance minister, Hazem Beblawi, tried to resign this month after clashes between soldiers and Christian protesters killed 25 people, mostly Christians. The military rejected his resignation.