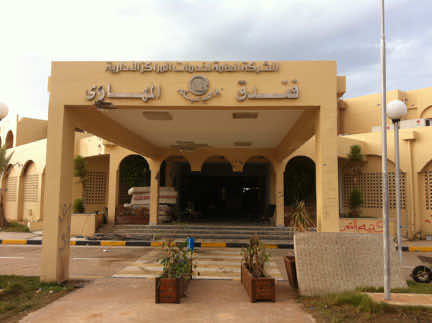 (Sirte) – Fifty-three people, apparent Gaddafi supporters, seem to have been executed at a hotel in Sirte last week, Human Rights Watch said today. The hotel is in an area of the city that was under the control of anti-Gaddafi fighters from Misrata before the killings took place.

Human Rights Watch called on Libya’s National Transitional Council (NTC) to conduct an immediate and transparent investigation into the apparent mass execution and to bring those responsible to justice.

“We found 53 decomposing bodies, apparently Gaddafi supporters, at an abandoned hotel in Sirte, and some had their hands bound behind their backs when they were shot,” said Peter Bouckaert, emergencies director at Human Rights Watch, who investigated the killings. “This requires the immediate attention of the Libyan authorities to investigate what happened and hold accountable those responsible.”

Human Rights Watch saw the badly decomposed remains of the 53 people on October 23, 2011, at the Hotel Mahari in District 2 of Sirte. The bodies were clustered together, apparently where they had been killed, on the grass in the sea-view garden of the hotel.

The condition of the bodies suggests the victims were killed approximately one week prior to their discovery, between October 14 and October 19, Human Rights Watch said. The bloodstains on the grass directly below the bodies, bullet holes visible in the ground, and the spent cartridges of AK-47 and FN-1 rifles scattered around the site strongly suggest that some, if not all of the people, were shot and killed in the location where they were discovered, Human Rights Watch said.

All the bodies were in a similar stage of decomposition, suggesting they were killed at the same approximate time. Some of the bodies had their hands tied behind their backs with plastic ties. Others had bandages over serious wounds, suggesting they had been treated for other injuries prior to their deaths.

About 20 Sirte residents were putting the bodies in body bags and preparing them for burial when Human Rights Watch arrived at the hotel. They said they had discovered the bodies on October 21, after the fighting in Sirte had stopped and they returned to their neighborhood. They identified four of the dead as residents of Sirte: Ezzidin al-Hinsheri, allegedly a former Gaddafi government official, a military officer named Muftah Dabroun, and two Sirte residents, Amar Mahmoud Saleh and Muftah al-Deley.

The Hotel Mahari was apparently in the hands of anti-Gaddafi forces from Misrata before the killings, and it remained in their control until the fighting in Sirte stopped on October 20, Human Rights Watch said.

Anti-Gaddafi forces are organized in brigades whose primary loyalty is to their city of origin. Many Libyan cities have numerous brigades, small groups of fighters who operate semi-independently during battles. More than 100 brigades (katiba) operate in the city of Misrata alone.

On the walls of the Hotel Mahari, Human Rights Watch saw the names of five known Misrata-based fighting groups, who had apparently based themselves in the hotel. At the entrance, as well as on the inside and outside walls, was prominently written the “Tiger Brigade” (Al-Nimer). In numerous places on other walls were written the “Support Brigade” (Al-Isnad), the Jaguar Brigade (Al-Fahad), the Lion Brigade (Al-Asad), and the Citadel Brigade (Al-Qasba).

There is no direct evidence that these five brigades were involved in the executions, but their apparent presence in the hotel requires immediate investigation, Human Rights Watch said.

“The evidence suggests that some of the victims were shot while being held as prisoners, when that part of Sirte was controlled by anti-Gaddafi brigades who appear to act outside the control of the National Transitional Council,” Bouckaert said. “If the NTC fails to investigate this crime it will signal that those who fought against Gaddafi can do anything without fear of prosecution.”

At a separate site in Sirte, Human Rights Watch saw the badly decomposed bodies of 10 people who had apparently also been executed. The bodies had been dumped in a water reservoir in District 2 of the city. The identity of the victims was unknown, and it was not possible to establish whether Gaddafi forces or anti-Gaddafi fighters were responsible. From the state of decomposition of the bodies, it appears they were killed prior to October 12.

Medical officials in Sirte told Human Rights Watch that pro-Gaddafi forces had carried out executions in the city. They said that medical teams and anti-Gaddafi fighters found at least 23 bodies, their hands bound, between October 15 and October 20.

The executions at the Mahari Hotel came to light just days after the still unexplained deaths of Libya’s former leader Muammar Gaddafi and his son Muatassim Gaddafi while in the custody of fighters from Misrata. Both men were captured alive in Sirte on October 20.

At the site where Muammar Gaddafi was captured, Human Rights Watch found the remains of at least 95 people who had apparently died that day. The vast majority had apparently died in the fighting and NATO strikes prior to Gaddafi’s capture, but between six and ten of the dead appear to have been executed at the site with gunshot wounds to the head and body.

To date, the NTC has failed to conduct a serious investigation into the killing of the former rebel military commander, Gen. Abdel Fattah Younes, who was killed with two aides on July 28 after being detained by opposition fighters, apparently after NTC officials had issued a warrant for his arrest.

Violence of any kind, and in particular murder, inflicted during an armed conflict on combatants who have laid down their arms or are in detention, is a war crime under the Rome Statute of the International Criminal Court (ICC). The ICC has jurisdiction in Libya for all crimes within its mandate committed since February 15, 2011. Under the court’s treaty, criminal liability applies to both those who physically commit the crimes and to senior officials, including those who give the orders and those in a position of command who should have been aware of the abuses but failed to prevent them or to report or prosecute those responsible.

“This latest massacre seems part of a trend of killings, looting, and other abuses committed by armed anti-Gaddafi fighters who consider themselves above the law,” Bouckaert said. “It is imperative that the transitional authorities take action to rein in these groups.”