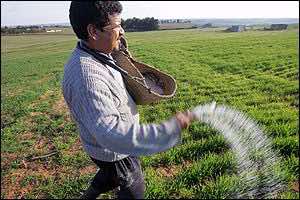 Many farmers would have considered sowing for crops other than grains had the rainfalls taken beyond the last week of October to show up.

“These rains will be very important because they will encourage farmers to sow more land,” an Agriculture Ministry spokesperson said.

The North African country’s weather forecast service said western plains, such as the major Gharb and Doukkala, were the first to receive rainfalls on Monday. The rain clouds will then move east towards the central and eastern plains which include Saiss and Moulouya.

Rainfalls are expected to abate on Tuesday before resuming on Thursday, the service said in remarks carried by the official MAP news agency.

Wheat is a key staple in Moroccans’ diet and agriculture is the country’s biggest employer and accounts for close to 15 percent its Gross Domestic Product (GDP).

Because the majority of wheat-planted areas are small properties owned by farmers who use the harvest for their own subsistence, a bad farming season often means social problems such as migration by thousands from the countryside to cities to search for jobs.

Morocco’s grains harvest reached 8.8 million tonnes in 2011, which is 18 percent above the year-earlier period.