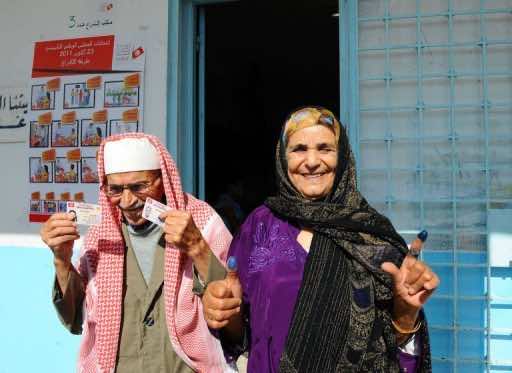 Tunisia’s main Islamist party claimed Monday to have captured about 40 percent of the vote in the country’s first free polls, as the cradle of the Arab Spring basked in praise for its democratic revolution.

Official results were only due Tuesday but provisional results released by some media outlets appeared to confirm Ennahda’s prediction that it would be the dominant force in Tunisia’s constituent assembly.

The leader of the secular centre-left PDP party, tipped as Ennahda’s main challengers before the vote, conceded defeat.

“The trend is clear. The PDP is badly placed. It is the decision of the Tunisian people. I bow before their choice,” leader Maya Jribi told AFP at her party’s headquarters.

Tunisians turned out en masse Sunday to elect an assembly seen as the custodian of the pro-democracy revolution that brought dictator Zine el Abidine Ben Ali’s 23-year-old rule to a crushing end nine months ago.

“We are not far from 40 percent. It could be a bit more or a bit less, but we are sure to take 24 (of the 27) voting districts,” Samir Dilou, a member of Ennahda’s political bureau told AFP, quoting “our sources”.

Another executive member said the Ennahda party’s own count showed it would have between 60 and 65 seats on the 217-member body.

The polls, for which over 90 percent of some 4.1 million registered voters turned out, won hearty acclaim from world leaders closely scrutinising developments on the soil of the Arab Spring’s trailblazer.

“This landmark election constitutes a key step in the democratic transition of the country and a significant development in the overall democratic transformation in North Africa and the Middle East,” UN chief Ban Ki-moon said.

Analysts widely predicted Ennahda to win the most votes but fall short of a majority in Sunday’s elections for the new assembly that will rewrite the constitution and appoint a president to form a caretaker government.

The assembly will decide on the country’s system of government and how to guarantee basic liberties, including women’s rights, which many fear Ennahda would seek to diminish despite its assurances to the contrary.

It will also have interim authority to write laws and pass budgets.

Ennahda says it models itself on the ruling AKP party in Turkey, another Muslim-majority country which like Tunisia to date has a secular state.

Its critics have accused Ennahda of preaching modernism in public and radicalism in the mosques, but Tunisia’s progressive left remains divided with party leaders having failed to form a pre-vote alliance.

This was Tunisia’s first-ever electoral contest without a pre-determined outcome, and the first run by an independent electoral body after decades of ballot-stuffing by the interior ministry.

Ben Ali was ousted in January after 23 years of iron-fisted rule in a popular uprising that sparked region-wide revolts which claimed their latest Arab strongman Thursday with the killing of Moamer Kadhafi of Libya.

More than 90 percent of the 4.1 million citizens who registered ahead of the poll had cast their votes, the ISIE elections body said late Sunday, like about 20 to 30 percent of the other 3.1 million voters who did not register but also had the right to vote.

“The people have voted, democracy has triumphed,” the daily La Presse said in bold, red letters — the colour of the Tunisian flag — on its front page Monday.

“October 23, 2011 will be remembered in history as a very special day not only for Tunisia but for the entire Arab world.

“For the first time in this vast autocratic region … a popular consultation was held that respected the rules and criteria followed in countries with a long tradition of democracy.”

The electoral system was designed to include as many parties as possible in drafting the new constitution, expected to take a year, ahead of fresh national elections.

The current, interim government will remain in power until the assembly appoints a new president, not before November 9.