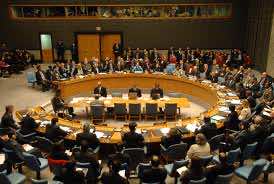 Voting resumed today at United Nations Headquarters in New York in the contest for the last remaining non-permanent seat on the 15-member Security Council.Four out of five vacant non-permanent seats for 2012-13 were filled on Friday when Guatemala, Morocco, Pakistan and Togo were successful by obtaining a two-thirds majority of Member States present and voting in elections determined by geographical grouping.But the seat open to an Eastern European country – succeeding Bosnia and Herzegovina, whose two-year terms ends on 31 December this year – remained unfilled after nine rounds of voting in the General Assembly. No country had met the two-thirds threshold.

When voting resumed today, Azerbaijan obtained 110 votes in the 10th round, while Slovenia received 83 votes. An 11th round of voting is scheduled to take place later this afternoon.

The four new members will join Colombia, Germany, India, Portugal and South Africa, whose terms end on 31 December 2012, and the five permanent Council members, which each wield the power of veto – China, France, Russia, the United Kingdom and the United States.