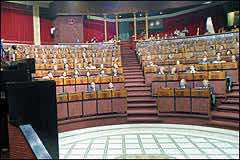 Moroccans are hopeful that the next parliament, set to be elected November 25th, will be able to change the face of politics and enable their voices to be heard.

The demands of the February 20th Movement included a call to dissolve the current parliament to make room for another that will meet the public’s expectations.

The Morocco constitutional reforms give significant privileges to the legislature, and the Chamber of Representatives in particular – privileges that must be exercised properly by competent, reliable MPs, experts say.

Political analyst Thami Chaoui said that it was time to change the public’s bleak perception of parliament and forge links of faith with this institution in order to reconcile people with politics.

“This cannot be done without committed MPs with a physical and intellectual presence who can successfully carry out the task of oversight and legislating that has been assigned to them,” he argued.

The opposition will have a number of privileges guaranteed by law, including freedom of opinion, expression and assembly and the right to play a part in monitoring the government’s work by way of censure motions and questions addressed to the government. Experts say this will help to breathe new life into parliament and improve its performance.

The future parliament must engage in real debates of use to the public as a whole instead of asking questions about local issues that should be resolved at commune level, said Nabil Benabdellah, secretary-general of the Party of Progress and Socialism.

The task of strengthening the role played by the Moroccan parliament will require high-calibre MPs, according to MP Fatima Moustaghfir.

“The next parliament needs a real élite so that it can pass the plethora of organic laws referred to in the Constitution. It’s parliament that will have to draft its own laws and get them adopted by the government, not the other way around. We need competent, experienced people”, she said.

People are hoping for a parliament of renewal in light of the current situation and the Arab Spring, said Lahcen Daoudi, deputy secretary-general of the Justice and Development Party. For these hopes to be fulfilled, he said, MPs must be capable of exercising the new privileges given to parliament.

Thami Chaoui said that it will take time to change parliament’s image in the eyes of the Moroccan public. One of its first orders of business must be to tackle absenteeism, which has long been a thorn in its side. “MPs must address the real issues and try to keep up with government business. Involvement is the key word,” he asserted.

Moroccans are widely voicing their hopes for change.

Abdelmalk Cherradi, a teacher, said that the quality of debates, monitoring of the government’s work and legislation must improve so that people can have faith in the power of parliament and not regard it as a rubber stamp for the government’s plans, as they do now.

“People need to feel that this institution is strong in terms of its performance and influence,” Cherradi said.