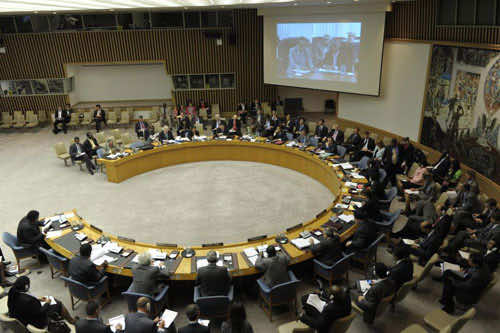 Azerbaijan will become a member of the Security Council for the first time in its history after winning the final vacancy on the 15-member body during voting today in New York.Azerbaijan claimed the non-permanent seat, awarded to an Eastern European country, on the 17th round of balloting after it scored 155 votes from United Nations Member States in the General Assembly – well clear of the necessary two-thirds majority of States present and voting. Slovenia received 13 votes and Hungary one vote.The country’s victory occurred after Slovenia, which was also a candidate for the same Eastern European seat, withdrew its bid at the end of the 16th round. In that round Azerbaijan had obtained 116 votes to Slovenia’s 77.

A representative of Slovenia told the General Assembly that while his country believed it would be a good fit for the Council, it was withdrawing its candidacy as the will of the Assembly was clear.

Azerbaijan, which will hold the seat in 2012-13, succeeds Bosnia and Herzegovina.

The five new members will join Colombia, Germany, India, Portugal and South Africa, whose terms end on 31 December 2012, and the five permanent Council members, which each wield the power of veto – China, France, Russia, the United Kingdom and the United States.