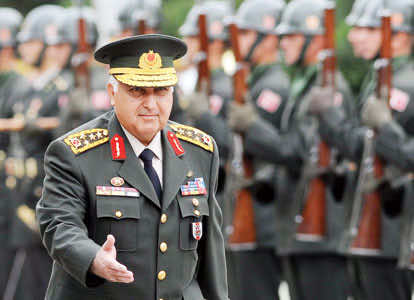 ANKARA- The outlawed Kurdistan Workers Party (PKK) is shifting to urban terrorism as part of a plan to take over state authority in southeastern Turkey, Chief of General Staff Gen. Necdet Özel said, cautioning that the morale of the security forces was “vital” in any efforts to resolve the Kurdish conflict.

The PKK has shifted its focus to urban attacks against security forces and public employees under a plan to “render the state dysfunctional and hand over the administrative authority in the region to illegal structures under its control,” Gen. Özel said in written response to questions by the NTV news channel.

The military chief said he learned of talks between the PKK and the National Intelligence Organization (M?T) only when an audio tape of the meetings was posted recently on the Internet, adding that he still did not know whether the tape was genuine.

The army’s task is to fight the PKK, while other issues related to the conflict are up to Parliament and the government, he said.

“To preserve the indivisible unity of the Turkish state and the nation one should do what is required by the state’s century-old traditions and common reason. Taking into account social values and sensitivities respecting the memory of dead soldiers and veterans and paying attention to the morale of the security forces is of vital importance for any step to be taken,” he said, NTV reported.

Özel said about 270 PKK militants had been killed in air raids on PKK hideouts in northern Iraq since August and more than 210 were wounded. Cross-border operations at a few locations in northern Iraq are still under way after 24 soldiers were killed in Hakkari last week, he said.

Turkey and the Untited States are making efforts for “more concrete results and improved efficiency” in intelligence-sharing against the PKK, he added.

In 2012, the army will contract 10,659 professional soldiers to be deployed at border units, in addition to the existing contingent of 5,103 soldiers who are currently being trained, he said.

In comments on the “Balyoz” (Sledgehammer) coup plot investigation, Özel said the military would not interfere with the judiciary but stressed that the trials should be completed “in a short period of time” and underlined that “freedom is a basic human right.”

The chief of General Staff spoke cautiously on suggestions to introduce paid military service, stressing that any eventual decision should take into account “people’s sensitivities” and did not lead to discrimination between rich and poor.

Commenting on the crisis with Greek Cyprus over gas drilling in the Mediterranean, Özel described sea areas where Turkey should hold exclusive rights as a “blue homeland” and said its size must be proportional to the length of coastlines. “About one-third of our blue homeland, which amounts to 145,000 square kilometers, is in the Mediterranean,” he said.