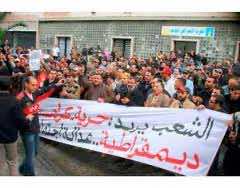 Through its autonomy initiative, Morocco has put on the table “constructive ideas” to solve the Sahara issue, said, on Monday in Rabat, Assistant Secretary of State for Near Eastern Affairs, Jeffrey Feltman.

“Morocco has put forward very constructive ideas … and we look at Morocco’s autonomy proposal as one of the potential solutions to this” issue, Feltman said during a news conference with Moroccan Foreign Minister Taib Fassi Fihri after a meeting.

He added that his country continues to support the UN-sponsored negotiating process aimed at settling this conflict, and support the efforts of the UN Secretary-General’s personal envoy for the Sahara, Christopher Ross.

Moreover, Feltman insisted that a sustainable, mutually acceptable solution to the dispute will contribute to preventing terrorist threats, transnational crime and drug trafficking in the region.

The US official congratulated the Kingdom on being elected as non-permanent member of the UN Security Council for two years, saying he is convinced that Morocco will play a leader, constructive and positive role on the Council.

The United States looks forward to working closely and constructively with the Kingdom within the Council to address the various challenges facing the world, he said.

Feltman said he discussed with Fassi Fihri a number of issues of common interest, especially the latest developments in the Arab region, mainly in Libya and Syria.