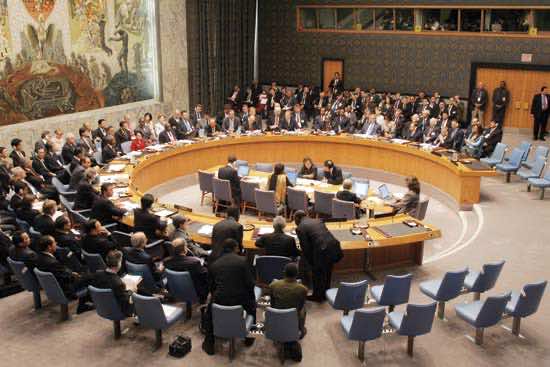 UNITED NATIONS – After 16 rounds of marathon voting, Azerbaijan, a former Soviet Republic, won a seat on the U.N. Security Council, beginning in January. Its rival Slovenia withdrew from one of the most hotly contested races in several years.

The 15-member U.N. Security Council, whose decisions are mandatory, can be critical in getting world support for sanctions, initiating peacekeeping missions or threatening states to cool it — or else. For countries initiating action, a positive vote in the Council shows international backing.

On Friday the 193-member General Assembly elected Morocco, Togo, Pakistan and Guatemala to serve two-year terms in the Security Council, starting in January 2012. But the Eastern European seat failed to get the two-thirds vote needed. The race was important enough that foreign ministers from most of the candidate nations came to New York to lobby.

The new Security Council’s political complexion next year will not be much different than it is now. Azerbaijan, a Eurasian oil-rich secular Muslim country of nine million people, will serve for the first time in the Security Council as a rotating member for two years. It is not expected to side with the West on controversial issues.

Slovenia had a Council seat in 1998-1999 and made its mark. Its then-ambassador, Danilo Turk, an international law professor, became a U.N. assistant secretary-general for political affairs and is now president of Slovenia, a nation of two million people. Slovenia is a member of the European Union, believed to be a key factor in its defeat as four EU members serve on the Council (Britain, France, Germany and Portugal).

In the final round, Azerbaijan got 155 votes, Slovenia 13 and Hungary 1, with 24 countries abstaining. Slovenia withdrew after losing the last round to Azerbaijan by a 77 to 116 vote. The lengthy balloting was unusual but in 2007, a race between Guatemala and Venezuela went 47 rounds before Panama became the compromise Latin American candidate and was elected.

How it works
Among the Council’s 15 nations, five are permanent members with veto power: Britain, France, China, Russia and the United States.

The other 10 elected members have two year terms with five rotating each year. At the end of this year, Brazil, Nigeria, Lebanon, Gabon and Bosnia leave the council. The new members will join Germany, Portugal, Colombia, South Africa and India, who remain on the Council for another year.

Pakistan holds hands with India
The election of Pakistan means it sits on the Security Council for a year with its arch-rival India and at a time when the United States accuses it of aiding insurgents in Afghanistan. But on most issues Pakistan and India as well as Azerbaijan are expected to join Russia and China in blocking American and European efforts to sanction such nations as Syria and Iran or take a tough line in Sudan.

Pakistan’s ambassador, Abdullah Hussain Haroon, told reporters he was on good terms with his Indian counterpart, Hardeep Singh Puri, who transmitted his congratulations by cell phone as Haroon was speaking to the media, in an obviously planned encounter.

They last served on the Council at the same time in 1977, before they had nuclear weapons. Their joint presence next year raises the number of nuclear-armed states in the Council to seven.

What’s it mean for Palestine?
The Palestinians want a vote for full membership in the United Nations which has to be approved by the Security Council. They are willing to accept a U.S. veto, if they can get the required minimum nine votes as a sign of support for another attempt in the future.

Palestine also intends to go to the General Assembly where it is assured of an upgrade in status as a non-voting observer state. This allows it to sign treaties and join other U.N. bodies. Congress intends to pull out of any UN agency that accepts Palestine, which could include the nuclear agency or the World Health Organization, a disaster for Washington.

“Our absence would only lessen our ability to influence how the world functions and would undermine the legitimacy of vitally important global institutions, “said former U.S. Senator Timothy E. Wirth, president of the U.N. Foundation.