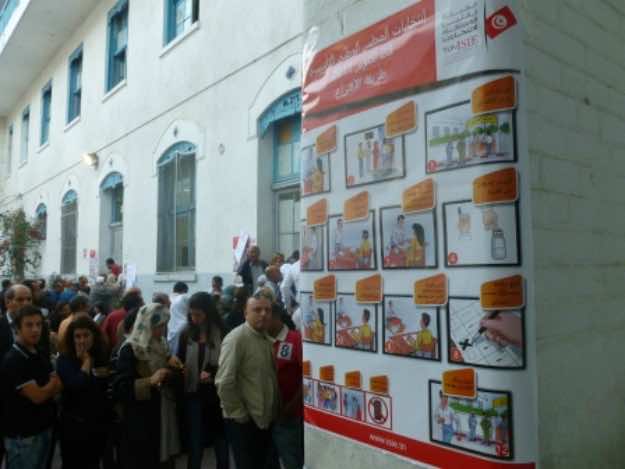 At 6:30 a.m. yesterday, the elections workers on Hope Street were scurrying and the army had taken their positions. My neighborhood elementary school was being taken over to hold the first elections since the overthrow of Ben Ali in January. A small group of voters gathered around the gates on Rue Amel (Hope Street) to cast the first ballots.

The orderly conduct of voters, observers, elections officials, and security personnel was a constant refrain throughout the day. Tunisians I spoke with almost seemed surprised that their bureaucracy could function so well. Hedia, a family friend excitedly told me, “The observers didn’t try and do anything — they just let us vote on our own.” Living in a country that has never held free elections, Tunisian voters seemed to surprise themselves by the efficacy of the process. Now, all attention will turn to the outcome — not just who won seats, but how the new assembly will be formed and where it will take the new Tunisia.

There were four great tests for the Tunisian election:  non-violence, turnout, pluralism, and fairness. Their success was anything but assured.

Many Tunisians worried about the potential for violence during the elections. The war in Libya has created a major security threat for Tunisia. Throughout the summer, the Tunisian press reported on small caches of arms that were found, or criminals in possession of weaponry traced to Libya. The government arrested thousands in pre-election sweeps and deployed 42,000 additional police and National Guard troops to ensure the elections went smoothly. In the end, there were no incidences of Election Day violence reported to the authorities, clearing the way for peaceful elections.

There were also serious concerns that Tunisians would not turn out to vote. After a lackluster voter registration drive over the summer and a widespread sense of disgruntlement with the slow transition process, officials worried that voters would avoid the polls. Despite a massive communications campaign, it was unclear that Tunisians would show engagement in the political process. Although official results are yet to be tallied, unofficial reports indicate that upwards of 70 percent of the population voted, not only legitimizing the elections themselves, but the entire process of writing a new constitution for the country.

Third, many worried that the Electoral Commission would prove biased, leading to illegitimate elections. But the Tunisian elections appear to have been remarkably free and fair. Despite some reported infractions, international and domestic elections observers have largely agreed that the elections were conducted according to international standards of transparency. More importantly, with very few exceptions in certain regions, the Tunisian people, for the first time, saw their officials conduct elections competently and without prejudice. Although there will undoubtedly be some angst over voting infractions and abnormalities, these elections will be viewed as a reasonable expression of the Tunisian people’s will. Likewise, despite fears that the elections would be manipulated by outsiders, these elections do not show any signs of outside influence of any kind.

Finally, there were great fears about the prospects of a victory by the Islamist party Ennahdha. Although full results are not yet in, preliminary results show Ennahdha with a commanding lead, perhaps winning as much as 50 percent of the total seats in the assembly. The civil war in Algeria, which started after the military overturned elections won by Islamists, is fresh in the minds of many Tunisians. In the week prior to Tunisia’s election, Ennahdha’s leader Rached al Ghannouchi raised alarms by calling for his supporters to revolt if the elections were deemed fraudulent. Secularists issued furious warnings about the dangers of Islamist rule. The widely expected Ennahdha victory raised the uncomfortable question of whether Ennahdha would truly be given a fair shot, whether their secular opponents would accept it, and whether the Islamists would live up to their pre-election promises to form a broad coalition government.

In the days following the election, Ennahdha has already reached out to two secular parties, the Congress for the Republic (CPR) and Ettaktol, to form a government of national unity. Both parties have agreed to discuss this possibility with Ennahdha. Meanwhile, the Progressive Democratic Party, which had always refused to ally with Ennahdha (and lost badly on Sunday), announced that it would respect the results of the election and be a part of the opposition. While it is too early to judge, these initial signs of collaboration also point to a major success for the elections and for the coalition building that will be necessary in the Constituent Assembly.

The road ahead will be a difficult one for Tunisia. The plurality of views will make consensus building difficult. Ennahdha supporters, after their substantial victory, may be resentful of challenges to the government and unwilling to compromise on their core values. There are already calls for protests by liberal groups, who Ennahdha supporters are calling sore losers. Tunisian civil society has expanded in the last few months and it will look to influence the Constituent Assembly on human rights, freedom of expression, and censorship. However, if civil society workers display constant challenges to the Islamist majority, they may come to be seen as partisan players rather than defenders of these shared values. Lastly, the economy remains a grim challenge to whichever government emerges. While the Tunisian economy will likely stabilize after the elections, the insecure global economy, particularly that of Europe — Tunisia’s largest trading partner — will likely be unable to provide the growth needed to cure the endemic unemployment.

U.S. officials thus far have signaled that they are not worried about Ennahdha’s victory. But nobody really knows how the international community will react to the seating of an Islamist government, or what policies such a government will pursue abroad. Already, resentment is building at the hysterical reaction of the French press to Ennahdha’s victory. Additionally, there will be great temptation for the new government to offer symbolic support for Islamic causes abroad, including the Palestinian issue. It will take great restraint on both sides to manage this politically sensitive relationship.

Post-election Tunisia faces serious challenges. But the debates, for once, will not take place behind closed doors. They will be in the open, in the press, and on the internet. The process will not be easy, but Sunday’s elections were a pretty good first step on the road toward democracy in Tunisia.