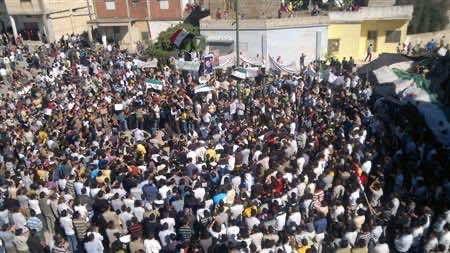 AMMAN  – Syrian army deserters killed seven soldiers in an attack on an armoured convoy Tuesday, an activist group said, a day ahead of an Arab League visit which aims to open dialogue between President Bashar al-Assad and his opponents.

Residents and activists said the fighting took place at a roadblock on the edge of the northwestern town of Maarat al-Numaan, where soldiers who defected during a military assault in the central province of Homs had gathered.

The assault on Homs was one of the largest offensives to crush a seven-month-old popular uprising against Assad that is evolving into a nascent armed insurgency.

Assad has agreed to meet an Arab League committee in Damascus Wednesday. Regional officials said Syrian authorities had dropped objections to the delegation being led by Qatar, which has sharply criticised Assad.

“What is hoped is that the violence will end, a dialogue will start and reforms will be achieved,” said Arab League Secretary-General Nabil Elaraby.

The six nation committee also comprises Egypt, which has been hosting members of the Syrian opposition, as well as Algeria, Oman, Sudan and Yemen — countries seen as more sympathetic to Assad.

Assad’s government says it is serious about political reform, which militants wanted to wreck. The opposition says Assad has no plan to relax his grip on power.

The Syrian Observatory For Human Rights said the seven soldiers where killed in Maarat al-Numaan, 230 km (145 miles) north of Damascus, when their armoured convoy came under attack.

“A firefight broke out in the early afternoon at the large barrier which is manned by soldiers and military intelligence personnel. Tanks are also deployed there,” a local resident, who gave his name as Raed, said by telephone.

He said the roadblock was attacked in response to a military operation overnight against defectors sheltering around a chicken factory on the outskirts of Maarat al-Numaan.

The town is located in an agricultural area on the main northern highway, 100 km north of Homs and 70 km from Syria’s main commercial hub Aleppo.

It was a hotbed of resistance in the 1980s to Assad’s father, the late President Hafez al-Assad, when his forces crushed Islamist and leftist challenges to his rule, killing tens of thousands of people.

Fighting also broke out overnight in the southern Hauran Plain, a strategic agricultural region on the border with Jordan now witnessing a the most sustained crackdown since the uprising began, and in Talbiseh near the city of Homs, residents said.

They said tanks stationed at roadblocks crisscrossing Talbiseh fired machineguns and anti-aircraft guns at neighbourhoods where deserters had taken refuge.

There were no immediate reports of casualties. Syrian authorities say “armed terrorist groups” in Homs and across the country and have killed 1,100 soldiers and police. The United Nations says the intensifying crackdown has killed 3,000 people.

Eight people were killed in Homs Monday when troops and militiamen fired at majority Sunni Muslim districts that have been a bastion of protests and, lately, a refuge for military defectors leading armed resistance, residents said.

Syria is dominated by Assad’s minority Alawite sect, an offshoot of Shi’ite Islam.

Aware of potentially seismic geopolitical implications if Assad were to fall, leaders of the mostly Sunni nations across the Arab Middle East have been cautious about criticising him as they struggle to deal with their own problems from the fallout of the Arab Spring.

A Sunni ascendancy in Syria could also affect Israel and play havoc with regional alliances.

Assad has been strengthening an alliance built by his father three decades ago with Iran’s Shi’ite rulers. Both countries back the Lebanese Shi’ite guerrilla group Hezbollah, which openly confronts Israel.

But the 46-year-old president has been careful about maintaining quiet on the occupied Golan Heights frontier with Israel, honouring a cease-fire brokered by the United States after Syria lost a 1973 war to Israel.

“I don’t think there is anybody in the region or outside who knows how to tackle the Syria issue,” Jordan’s King Abdullah, whose government has been quietly receiving Syrian refugees, told CNN.

The main opposition Syrian National Council, which formed in Istanbul last month, said the Arab League mission could give Assad more time to press on with the crackdown unless it achieved the immediate released of tens of thousands of prisoners and revealed the fate of thousands who are missing.

The Council said in a statement that troops had to withdraw from the streets and a pro-Assad militia had to disband, with international human rights monitors allowed in.

Relations also deteriorated this week between Syria’s rulers and Washington, which has called for Assad to step down.

The United States said Monday it had pulled its ambassador out of Syria because of threats to his safety, prompting Syria to follow suit. U.S. envoy Robert Ford had antagonized Syria’s government with high-profile support for anti-government demonstrators. Assad supporters attacked the U.S. embassy and Ford’s convoy in recent months.