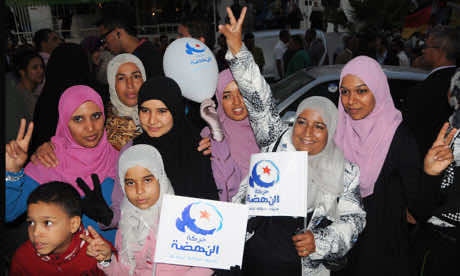 TUNIS, Tunisia  — A moderate, once-banned Islamist party in Tunisia is on track to win the largest number of seats in the first elections prompted by the Arab Spring uprisings, according to partial domestic results Tuesday.

The Tunisian electoral commission said the Ennahda party has won 18 out of 44 domestic seats so far in a 217-member assembly meant to write a new constitution. Together with the results announced Monday from Tunisians living abroad, Ennahda now has 27 out of 62 seats total, or just over 43 percent.

The final results from Sunday’s elections could boost other Islamist parties running in elections in North Africa and the Middle East.

Ennahda, which was long suppressed by Tunisia’s dictator before he was overthrown in January, was the best organized party in the election and had claimed victory Monday based on preliminary estimates.

The next most popular party, the Congress for the Republic, is a distant second with just 10 seats.

Election officials said the painstaking nature of the counting process has delayed the release of the results.