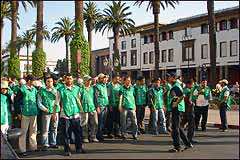 About 4,000 jobless graduates staged a second day of peaceful demonstrations on Tuesday in Morocco’s business hub Casablanca to demand public sector jobs, adding to pressure on a government wary of contagion from the “Arab Spring” uprisings.

Under the banner of the National Association of Jobless University Graduates, the protesters organised a sit-in in front of Casablanca’s stock exchange on Tuesday, with police watching over them.

The protests show unemployed graduates are stepping up their action. On Sunday they joined for the first time a demonstration organised by an opposition movement, inspired by revolts in Tunisia and Egypt, to demand deep political reform.

“The stock exchange is a club for a minority that has accumulated huge wealth helped by political and economic crimes that have led our country to the situation where it is at and caused such high unemployment among the youth,” Abdallah al-Majdi, who chairs the association, told Reuters by telephone.

A source in the Casablanca bourse said the protesters held the sit-in for nearly two hours before they dispersed peacefully. “There was no incident during the protest,” the source said.

A government official played down the risk that may be caused by the demonstrations. “They have the right to protest as long as it is done in a peaceful manner. We have always kept the door open for their recruitment.”

With almost a third of youths unemployed, high poverty rates, a poor education system and problems with nepotism and corruption, Morocco has many of the same conditions that sparked revolts in other Arab states.

Morocco’s ruler, King Mohammed, reacted to the “Arab Spring” by announcing that he will give up some of his powers and hand them over to elected officials. He still has the last word on all issues of security, defence and religion.

Moroccans will vote on Nov. 25 in a parliamentary election. The vote was brought forward by 10 months because the king wanted a new government to enact the constitutional reforms.