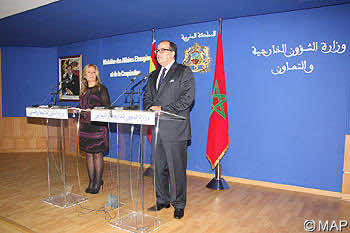 There is a « deep and permanent » dialogue between Rabat and Madrid, Moroccan Foreign Minister, Taieb Fassi Fihri, said on Tuesday in Rabat at a joint press briefing with his Spanish counterpart Trinidad Jimenez.

Spain represents for Morocco a “strategic partner”, Fassi Fihri said, stressing the importance of relations between the two countries especially in the current circumstances.

Describing as “very important” Jimenez’s visit to Morocco for the strengthening of bilateral relations, Fassi Fihri said that his meeting with the Spanish official tackled relations between Morocco and the European Union, as part of the implementation of the “Advanced Status” and the importance of Spain’s role in this regard, as well as the Union for the Mediterranean question.

The Minister noted that the two parties also raised the developments related to the process of negotiations regarding the Sahara issue, adding that Morocco respects Spain’s stance, which consists in supporting the international legality and negotiations.

He expressed hope that the current events in the Arab world and in the Sahel region will encourage the other parties to support the negotiation process.
Fassi Fihri also voiced the solidarity of the Moroccan government with Spain and families of the Spaniards who were abducted in Tindouf and denounced this “reprehensible act,”

He held Algeria accountable for protecting the safety of people on its territory.

The Minister recalled that Morocco was among the first countries to warn against the expansion of the Al-Qaeda in the Sahel region and has called for strengthening regional and international cooperation between the countries concerned.